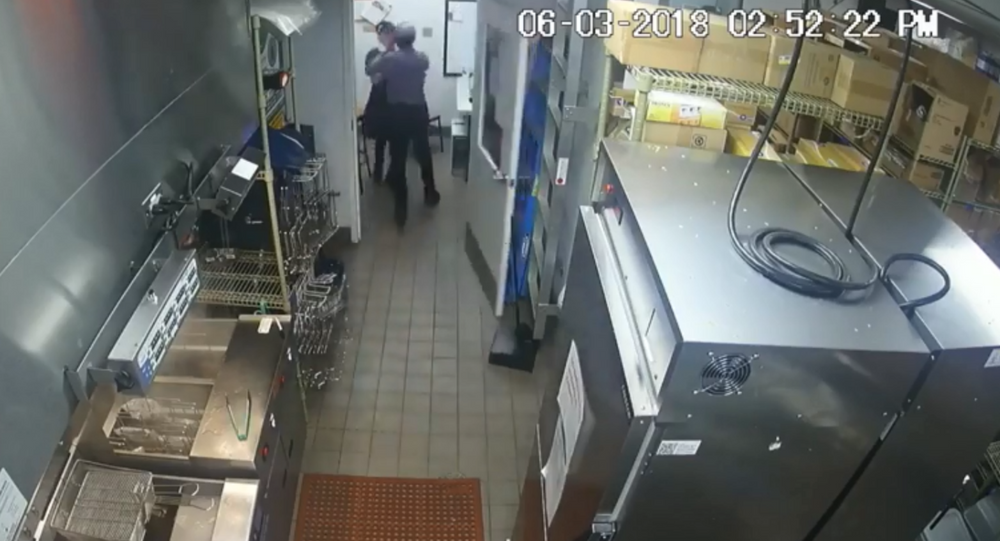 Linda Witkerson, a former manager at a Taco Bell fast food restaurant in Portland, Oregon, was recently sentenced to three years of probation for strangling her pregnant co-worker during a heated argument last year.

Shocking surveillance footage of the altercation shows Hulett and Witkerson walking toward an office near the restaurant's kitchen area at roughly 2:50 p.m. local time on June 3, 2018.

​Within moments, the pair are seen waving their hands at one another before Witkerson eventually decides to walk away from the situation, slamming the office door in her employee's face. Things further intensify after Hulett appears to yell at Witkerson, which prompts the former manager to slam the door a second time before placing her hands around Hulett's throat.

Witkerson appears to strangle Hulett for at least three seconds before she's pushed off. The two workers continue to argue with each other for a period of time as a concerned employee looks on in shock. Footage of the incident ends with Witkerson appearing to go back to work as Hulett leaves the restaurant.

Local media reports indicate that the heated exchange began as a result of Witkerson's growing frustration with Hulett over frequent breaks. At the time of the altercation, Hulett was four months pregnant.

"To me it is a big deal. I was pregnant with my now healthy son. That was my job. I was supposed to feel safe there," local news station KPTV reported Hulett saying in court on Friday.

"I wasn't sure if she was going to let go of my throat. It was a big deal. I do believe she deserves this sentence."

Hulett told the Oregonian that she no longer works at the restaurant, and that she was happy to hear that Witkerson had pleaded guilty to the charges, since she wasn't looking forward to preparing for a possible trial in the case.

"I'm glad there was at least some kind of punishment for what she did… I think she got what she deserved," she said.

In a statement to Sputnik, Taco Bell indicated that Witkerson had been fired from the company "at the time of the incident." They added that the company and the franchisee who owns and operates the location "do not tolerate this type of behavior."

May I Take Your Order? Taco Bell Plies Congress With Food Frenzy