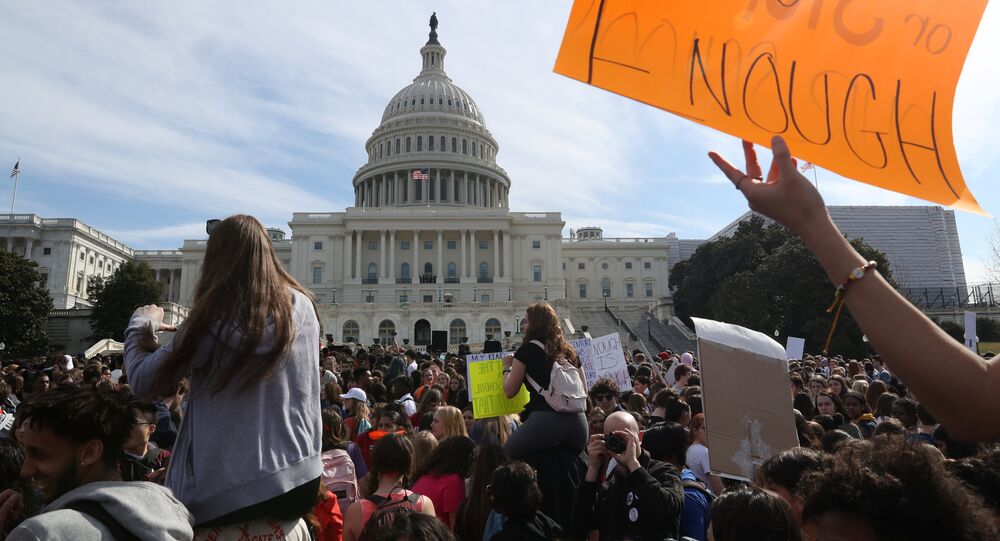 For the second year, US students across the country organized their peers and headed demonstrations protesting gun violence and advocating for firearm reform, as well as remembering the 17 high schoolers who lost their lives in the 2018 Parkland school shooting.

Chanting catchy slogans such as "hey hey, ho ho, the NRA has got to go" and "books not bullets," students from Maryland, Virginia, and Washington, DC, took to Capitol Hill March 14 in "#NationalWalkoutDay" to voice their concerns and demand Congress take action to end gun violence.

Various events and gatherings were planned for the poignant day, but Women's March Youth Empower and Youth Climate Strike headed the March 14 charge and allowed students across the nation to organize their own events under the organization's "#ENOUGH" umbrella.

Arriving via everything from charter buses to public transportation, students seemed eager to march against gun violence (even with the early wake-up call).

Students from BCC high school in Md already walking out of school and heading to the Capitol for gun control rally. #enough @wamu885 pic.twitter.com/uon3N9y9dr

Students have gotten off the metro and are walking towards the White House pic.twitter.com/CiMx20Thrv

Headed to the White House this morning! These students are full of energy…(They woke up at 5:30 AM 😂). pic.twitter.com/bLB9LNFpcj

Those marching on Capitol Hill made deliberate statements in remembrance as they released 17 balloons in memory of each Parkland victim and turned their backs to the White House as they sat in silence for 17 minutes.

Complete silence for 17 minutes here outside the White House — one for each person lost in the Parkland shooting. pic.twitter.com/V5iePHN29h

Even as they sit in silence-more students continue to pour in. #ParklandSchoolShooting #walkout #dc #dmv @wusa9 pic.twitter.com/x40VjKKjM3

Aside from those 17 minutes, DC appeared lively, and the crowd continued to grow in size as the day went on.

DC area students are at the White House for a mass walkout against gun violence. Lively group at the gates to the north lawn: “The NRA has got to go.” @WTOP pic.twitter.com/gPQT4hDHKq

Outside the White House pic.twitter.com/nRXbS4L8nY

Though the focus of the day for many was remembrance and reform through a school safety lens, some young adults, such as Washington, DC, student Sean Beach, want to see changes across the board.

"I can hear guns being shot outside my building; like, I can hear them on the back street. But now it happens so often, I got used to it now. That's sad to say. If we're going to stop school shootings, we have to stop all shootings," Beach told WAMU.

One year after the 2018 demonstration advocating for gun reform and a year and a month after the Parkland shooting that claimed 17 students' lives, 26 states (and Washington, DC) have enacted 67 new gun safety laws, according to the Giffords Law Center.

Despite the increase in legislation, little legal progress has been made in attempts to expand the scope of background checks for potential firearm owners due to party-line contention in Congress.