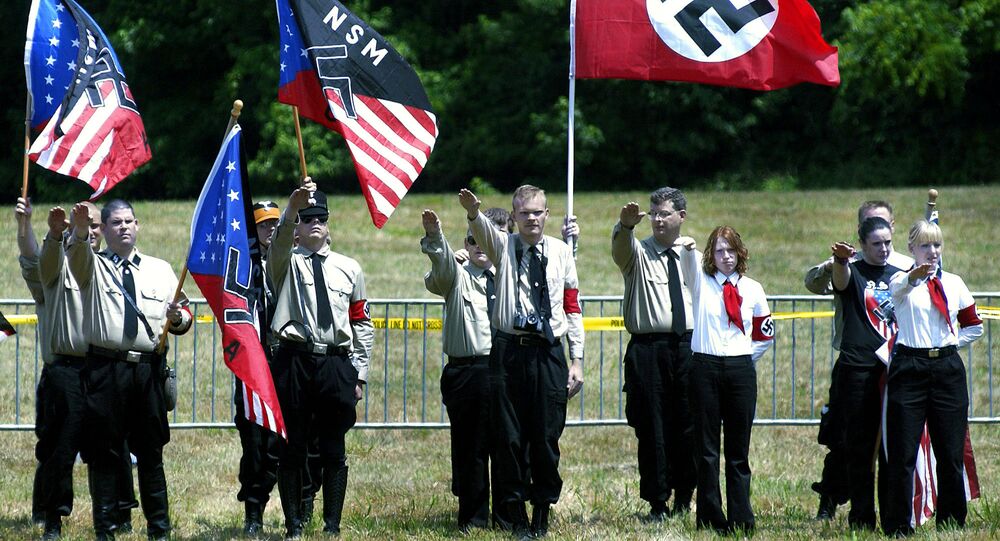 In a takeover as unlikely as it is bizarre, a black American civil rights activist now controls a high-profile US neo-Nazi group and has promised to “set some hard records straight.”

© AFP 2020 / MAHMOUD TAHA
US Refuses Security for Humanitarian Convoys Near At-Tanf - Russian MoD
James Hart Stern, a black American man, has taken control over one of the more notorious white racist groups in the nation, the National Socialist Movement (NSM), a loose-knit white-nationalist cabal implicated in the 2017 death of a counterprotestor in a rally in Charlottesville, VA.

Often referred to as a ‘race whisperer,' Stern, 54, previously won control over the southern US racist organization the Ku Klux Klan (KKK) by gaining power of attorney from one of that group's legal chiefs, according to The Guardian.

In assuming control of the NSM, Stern has made no secret of his plans to diminish its influence, beginning with the Virginia lawsuit in the wake of the deadly 2017 protest that saw a male white-nationalist supporter plow his vehicle into a group of unarmed bystanders.

Stern will seek a guilty verdict from the judge against the NSM, of conspiring to commit violence at the 2017 white-nationalist march.

Stern previously earned the trust of now-deceased KKK leader Edgar Ray Killen, after sharing a prison cell with the former ‘grand master' and hashing out their differences. Stern was in jail at the time for mail fraud.

Killen, imprisoned in 1964 for three murders, freely signed over to Stern power of attorney for his estate, according to reports, giving Stern authority over any assets of the group but, much more importantly, over the name itself.

Stern then dissolved Killen's claim to the KKK brand, although splinter groups still exist globally and in the US, according to reports.

His ongoing takedown of the neo-Nazi NSM, however, promises to be much more authoritative.

© Sputnik / Aleksei Nikolsky
US Seeks to Form Coalition For Gov't Change in Venezuela - Bolton
In early 2019, NSM head Jeff Schoep approached Stern for legal advice relating to the ongoing Virginia lawsuit. Desperate for assistance in dodging responsibility for his and his group's consistently hateful actions and beliefs, Schoep was offered a way out of the mess he had created by handing over the ownership and management of the racist cabal to Stern, according to The Guardian.

Documents filed to court on February 15 detail that Stern is now the president and the director of the NSM. While the black activist notes that big changes are coming, he added that the group will not be disbanded completely as that could easily lead to a reinvention and rebranding of racist nationalism in the US.

"Everything is out in the open. My plans and intentions are not to let this group prosper. It's my goal to set some hard records right," said Stern, cited by The Chicago Tribune.

An increasingly mainstream white-nationalist movement in America has spread in the wake of the election of US President Donald Trump, as sophisticated branding campaigns seek to shade racist overtones within the nation under a banner of ‘alt-right' cultural politics, according to The Guardian.