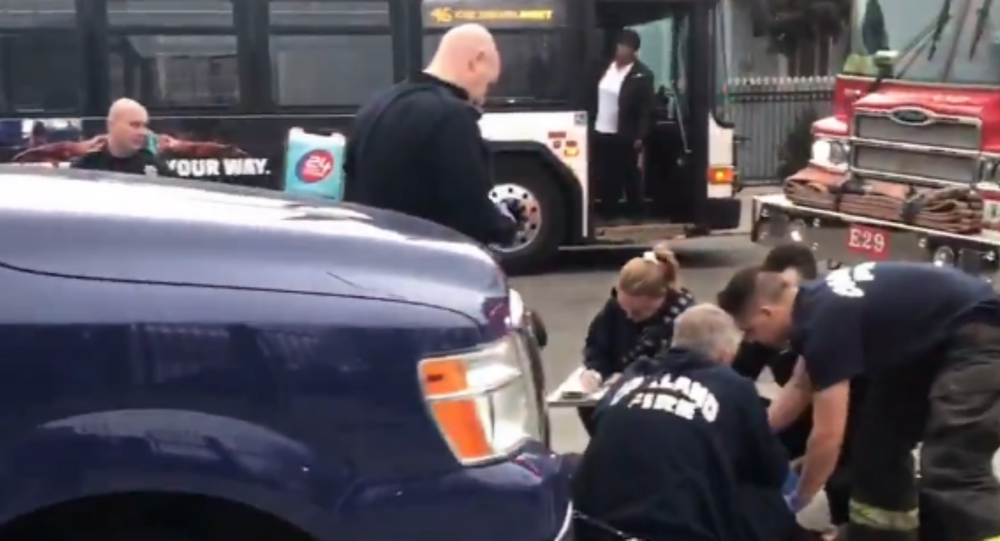 On Sunday, a security guard for a KPIX 5 news crew was shot in the leg and hospitalized while reporters were covering a teachers’ strike in Oakland, California.

Reporter Joe Vazquez and photographer John Anglin were preparing to interview strikers at the Oakland Library around 5 p.m. Sunday when a car pulled up and two people got out and demanded the news crew's equipment. One of the suspects shot security guard Matt Meredith in the leg during the incident, even after the news crew surrendered their equipment, according to KPIX.

​"John abandoned the camera, took cover inside the news van where I was and told me to get down," Vazquez wrote on Twitter Sunday. "We heard a flurry of loud gunshots. Very close! More shots, I saw a guy drag the camera away and saw our guard Matt was hit. Quickly called 9-1-1."

​In another tweet, Vazquez added that the guard who was shot is a retired Berkeley, California, police officer who "got some shots off" at the shooter.

​The guard was transported to Highland Hospital in Oakland and is currently in stable condition, CBS News reported.

Surveillance footage released online shows Oakland police officers pursuing a champagne-colored Lexus sedan at around 6:56 p.m. Sunday. However, Oakland police have not yet confirmed that the chase was related to the KPIX news crew robbery.

​According to Oakland Police Public Information Officer Johnna Watson, the police department has already detained several individuals who may be connected to the armed robbery and shooting, the Oakland Police Department reported. In addition, Alameda County Sheriff spokesperson Sergeant Ray Kelly reported that a 21-year-old man who walked into Highland Hospital at 5:15 p.m. Sunday with gunshot wounds was also detained and arrested due to potential links to the shooting. More details are expected to be released Monday.

​"The Oakland Police Department can confirm at least two arrests have been made in connection with the armed robbery of a Bay Area news crew that occurred on Sunday, February 24, 2019, at 4:57 p.m., in the 1000 block of 81st Avenue. The security guard who was shot during the robbery has since been released from the hospital. Officers and investigators have recovered the film camera. The investigation continues," Watson said in a statement to Sputnik Monday.

This isn't he first time a news crew has been robbed in the Bay Area. In 2012, a group of men punched a KPIX cameraman filming in front of a high school in Oakland and stole his camera.

"We don't know what the market is for these cameras," San Francisco Police Sgt. Michael Andraychuk told AP back in 2015.

US Border Patrol Officer Involved in Shooting Incident in Arizona