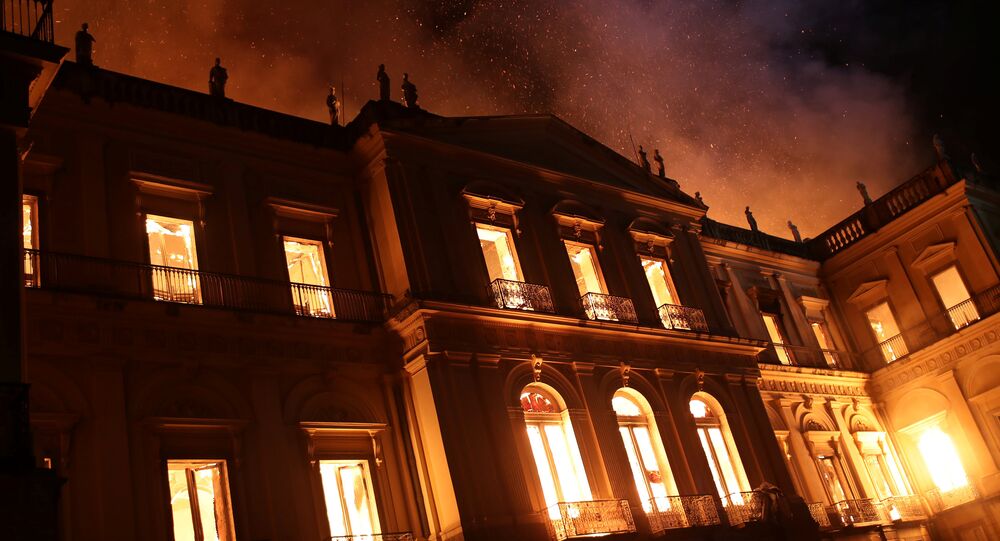 Five months after a fire engulfed Brazil’s National Museum, have managed to recover around 2,000 items from its collections. The oldest scientific institution in the country, the museum had contained more than 20 million priceless exhibits and artifacts.

Since the fire in September 2018, dozens of anthropologists, archaeologists and paleontologists have spent around nine hours a day, six days a week searching through the ashes for items that can be salvaged, according to Smithsonian.com.

"The work must be done very carefully and patiently," the museum's director, Alexander Kellner, told AP in December, when only around 1,500 items had been recovered.

Some of the items recovered to date include remains of Brazilian indigenous arrows, a Peruvian vase and a pre-Columbian funeral urn. In October, the researchers found 80 percent of the 11,500-year-old skull of Luzia, the oldest human skeleton ever found in the Americas. Part of Luzia's femur was also recovered.

The Bendegó Meteorite, which is the biggest iron meteorite ever found on Brazilian soil, weighing around 5.8 tons, was also found during recovery efforts. The 44-foot Maxakalisaurus topai dinosaur skeleton, originally found in the Brazilian state of Minas Gerais in 1998, was also recovered along with two karajás dolls and a semilunar ax from Maranhão (a state in northeastern Brazil), Smithsonian.com reported.

​"It is important to stress that the National Museum, despite having lost a significant part of its collection, has not lost its ability to generate knowledge," Kellner wrote in an open letter last year.

According to Claudia Carvalho, the archaeologist in charge of recovery efforts, researchers are now beginning to collect, sort, catalogue, stabilize and restore the rescued artifacts. However, search efforts are expected to continue through the end of 2019.

The National Museum of Brazil was one of the largest museums of natural history and anthropology in Latin America. Founded by King John VI of Portugal in 1818, the museum featured records of Brazil's natural history as well as items produced by ancient civilizations throughout the world.

Authorities have yet to confirm what caused the fire, although museum officials have admitted that the building did not have important security features such as a sprinkler system, and the fire risks were well known due to severe government cuts to the budgets of Brazil's cultural institutions.

According to the vice-director of the National Museum, Luiz Duarte, the institution had suffered from years of neglect under numerous governments, Reuters reported at the time.

"We never got anything from the federal government… We recently finalized an agreement with [state-run development bank] BNDES for a massive investment, so that we could finally restore the palace, and, ironically, we had planned on a new fire prevention system," Luiz Duarte told Globo TV following the blaze.