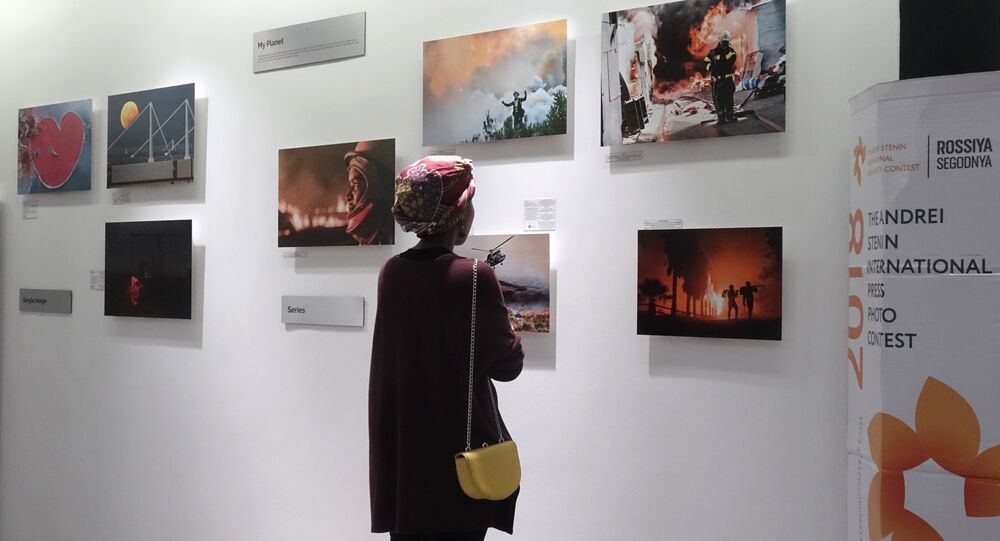 JOHANNESBURG, Rossiya Segodnya Press Office. An exhibition of works by talented young photographers selected by the Andrei Stenin Contest jury opened in Johannesburg, South Africa. The exhibition is part of the 2018 winners’ tour that started in Moscow in early November.

The winning entries will be on display at the Market Photo Workshop until February 25.

Among the brilliant images from the exhibition's almost 50 photographs are The Desire to Live, a moving work by Iraqi photographer Taisir Mahdi featuring a young amputee and football player who personifies the powerful and positive energy of hope and faith in the future; the colorful Cranberry Heart by Belarusian photographer Sergei Gapon; a touching portrait of a Nenets boy amidst a snow-covered landscape by Israeli photographer Oded Wagenstein; the black and white series Ultras on Ligurian football fans seen through the lens of Italian photographer Andrea Alai, and many others.

The exhibition in Johannesburg also presents the Grand Prix winning series How I Fell Ill by Russian photographer Alyona Kochetkova, which documents her dramatic fight against cancer.

Before the opening ceremony, Russian Ambassador to South Africa Mikhail Petrakov commented: "Photography is a unique multifaceted and authentic art form, which allows bringing to the audience the most poignant and intricate moments, to highlight most topical stories on the very edge of life. The International Stenin Press Photo Contest is an excellent opportunity for young photographers from all around the globe to draw attention and make one's name. It is no coincidence that this annual Contest is held in commemoration of Andrei Stenin, who died in the line of duty in Eastern Ukraine in 2014. We celebrate and cherish Mr Stenin's abilities and professionalism, are happy to see that under his name young talents establish themselves as artists."

© Sputnik / Ignacio Colo
Andrei Stenin International Press Photo Contest Opens Exhibition in Buenos Aires
In his video message to guests and participants of the opening ceremony, Rossiya Segodnya Director of Photography Alexander Shtol said: "For the second year running Johannesburg has been one of the cities hosting our exhibition. We are happy that local photojournalists participate in the contest, winning various nominations. This year, South African photographer Justin Sullivan took the first prize in the Top News Single category for his "Stand Off."

The award-winning photo not only draws attention to the complex topic of public protests but also serves as a reminder of how difficult and dangerous a photo correspondent's work is."

ANA news agency Director of Photography from South Africa Ian Landsberg had this to say: "It is an exciting opportunity to have for the second year the exhibition of winning images of the 2018 Andrei Stenin International Photo Contest at The Market Photo Workshop in Johannesburg. Showcasing the winning works of intrepid and talented international photojournalists at this venue is another step in reaching the objective of this school of photography to "ensure that visual literacy reaches the neglected and marginalised parts of our society".

The contest is a platform for young photographers — talented and sensitive people who are open to everything new. Their images draw the attention of the public to the people and events around them. The 2019 contest is open for entries until February 28 at stenincontest.com.

The industry partners supporting the contest are the Russian Photo and Photo-study.ru websites, School of Visual Arts, Academy of Photography, the YOung JOurnalists information portal, the Contrastes magazine, the Fotoargenta magazine, the All About Photo website, and PhotON festival as an international partner.