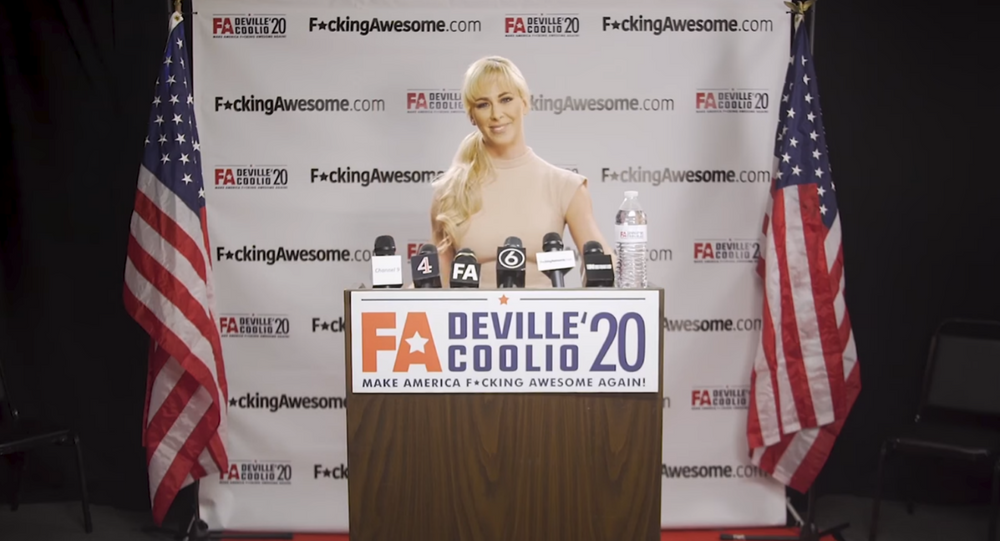 Adult film actress Cherie DeVille announced this week that her bid for the 2020 presidential election was no more after she failed to gain enough support from American voters.

DeVille, whose real name is Carolyn Paparozzi, first announced her presidential run in August 2017 with the release of an introductory video that featured American rapper Coolio as her running mate.

Running on a campaign to "Make America F**king Awesome Again," DeVille told the Huffington Post in November 2017 that she saw fit to run in the 2020 election cycle after witnessing the support that US President Donald Trump had received.

​"When he first ran, I thought his campaign was a stunt or joke, and people were only watching because it made good TV," she told the publication. "I thought when the election came, people would do what's right and not vote for him, but people seem more interested in celebrity than a person's views and more interested in the spectacle."

And with that, a light went on, and she decided that she could use her own wow factor to help unseat Trump.

"I have good communication skills. I can read people. I'm diplomatic with people of all backgrounds. I'm open-minded and accepting of people of other cultures," she said, stressing that her "philosophy of governing is based on integrity, honesty and openness."

The "Gangsta's Paradise" rapper was ultimately brought into the mix in an effort to boost the campaign's reach, according to DeVille. "He represents the American dream… he started from nothing and made something of himself," she said.

But in the months that followed, her campaign hit several road bumps that included a lack of fundraising dollars and threats from the public. And that wasn't all: She also lost her running mate and a sponsor that she found had only joined her campaign for publicity.

I’m out of insta jail!! Hope my parole officer is cool 😎

​"People got crazy, mean, violent," the North Carolina native told the Washington Examiner of her experiences. "Perhaps that happens to all political candidates… but I don't have the money for bodyguards."

"I even had people tell me it was a sign of the fact the US was moving forward in a negative way, and that they would end that… People with those feelings about pornography are very serious, very serious about how they feel," she continued.

"If we step out of our lane as — pardon my language — whores, now we are a problem, and people don't like it, in a way that I didn't understand."

DeVille had intended to run for the Libertarian Party nomination, advocating for free education, gun control, government-mandated net neutrality and the legalization of marijuana.

"Even if it only showed five people that pornographers are real people with vast interests… then it was worth it for me," she told the Examiner. For the time being, DeVille plans to focus her attention on establishing support groups for actors new to the adult film industry.