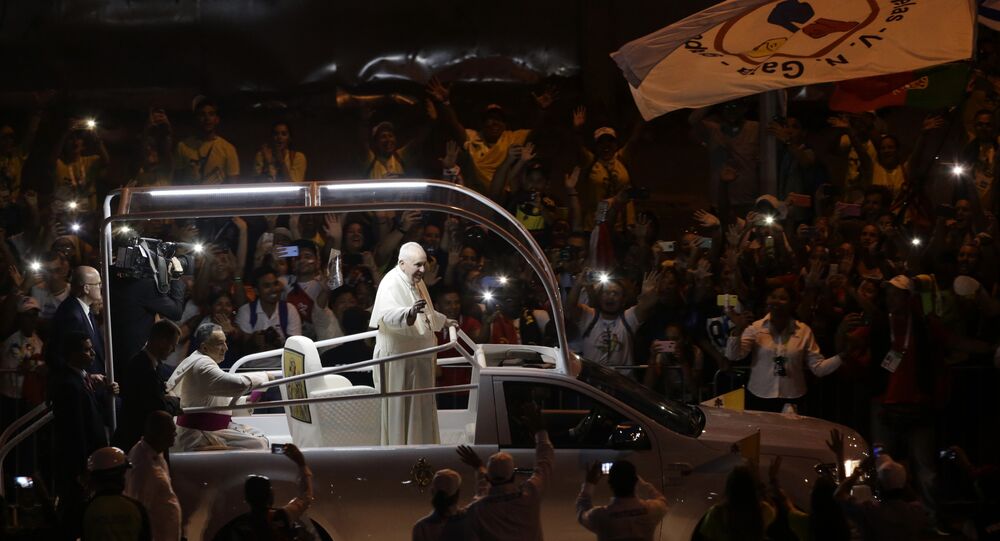 Responding to increasing threats of political nationalism in the US and Europe, Pope Francis I called on Catholics to welcome migrants.

While speaking at a Roman Catholic Church's World Youth Day religious service in Panama On Friday in front of several hundred thousand youth, Pope Francis said that it was "senseless and irresponsible" to stigmatize migrants.

"We want to be a church that fosters a culture that welcomes, protects, promotes and integrates; that does not stigmatize, much less indulge in a senseless and irresponsible condemnation of every immigrant as a threat to society," he said, just a few hours after US President Donald Trump agreed to end a 35-day partial US government shutdown in spite of not receiving $5.7 billion he had demanded from Congress to build a wall along the US-Mexico border.

At the Friday ceremony, dubbed Via Crusis (Way of the Cross), the Pope — the leader of the world's largest religion — spoke of "how to welcome and take in all those abandoned, and forced to leave or lose their land, their roots, their families and their work," Reuters reported.

"How are we to react to Jesus as he suffers, travels, emigrates in the faces of many our friends, or of all those strangers that we have learned to make invisible?" Francis asked the crowd

Trump and other nationalistic leaders in the developed world have repeatedly harped on the issue of immigration. The US president has warned of a caravan of asylum-seekers heading toward the US border and claimed that Democrats will allow undocumented immigrants to flood the United States, Sputnik previously reported.

Caravans of migrants from Central American countries began to move toward the United States through Mexico last fall. There are about 6,000-9,000 migrants from Honduras, Guatemala, and El Salvador staying in the Mexican cities of Tijuana and Mexicali, according to estimates.

Last year, Pope Francis empathised with the plight of migrants fleeing war in their native countries by drawing a comparison between the biblical story of Joseph and Mary — who were seeking a place for their Messiah to be born — and the current refugee crisis in Europe.

Europe has been experiencing the largest migrant crisis in modern history, beginning in 2015 with over 110,000 migrants and refugees, most of them from Syria and Iraq, entering Europe. To date an estimated 1 million refugees fleeing dangerous unrest in northern Africa and the Middle East have attempted to enter Europe, seeking an escape from the cycle of violence, according to the United Nations High Commissioner for Refugees (UNHRC).

"So many other footsteps are hidden in the footsteps of Joseph and Mary. We see the tracks of entire families forced to set out in our own day. We see the tracks of millions of persons who do not choose to go away but, driven from their land, leave behind their dear ones," Pope Francis said during the 2018 Midnight Mass, Sputnik previously reported.