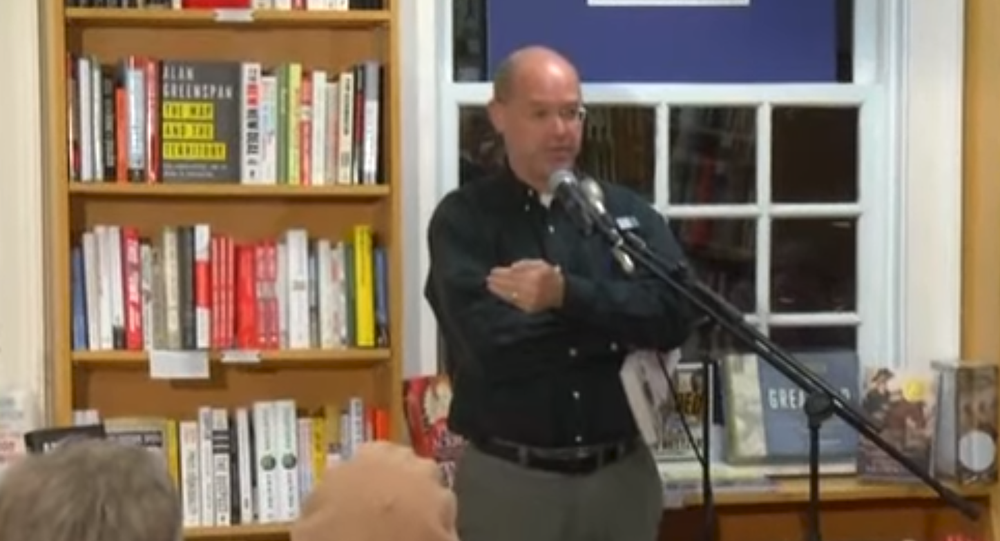 William Arkin, a political commentator at NBC, threw in the towel Wednesday in an email excoriating the network’s increasingly tepid criticism of the US state and its reflexive opposition to US President Donald Trump, noting it put the outlet in the uncomfortable position of supporting what he called “perpetual war.”

© Flickr / Sam Felder
‘Endless War’ Allows US Anti-War Movement to Influence US Military Policy
In his Tuesday resignation letter, Arkin traces his troubled history with news media, including NBC, which he's come and gone from several times over the years. Building up to the network's shift in focus with the advent of Trump and the "social media wave," he notes that things started to slide downhill after the September 11, 2001, attacks and the country's dramatic shift toward "our new kind of wars when there were no real fronts and no actual measures of success."

This shift by NBC, from the good, honest media to the unfocused and bad media, is central to Arkin's complaint. He rejects the idea that media is inherently partisan, instead noting that like other networks caught up in the "political horse race," NBC "has become somewhat lost in its own verve, proxies of boring moderation and conventional wisdom, defender of the government against Trump, cheerleader for open and subtle threat mongering, in love with procedure and protocol over all else (including results)."

​Arkin laments that since 2001, US media has become less critical of Washington's policies, and instead of asking the tough questions and reporting on the tough stories, "NBC (and others) meanwhile report the story of war as one of Rumsfeld vs. the Generals, as Wolfowitz vs. Shinseki, as the CIA vs. Cheney, as the bad torturers vs. the more refined, about numbers of troops and number of deaths, and even then Obama vs. the Congress, poor Obama who couldn't close Guantanamo or reduce nuclear weapons or stand up to Putin because it was just so difficult."

© AP Photo / Rahmat Gul
Activist: War in Afghanistan ‘Not Meant to Be Won, It's Meant to Be Perpetual'

"We have contributed to turning the world national security into this sort of political story. I find it disheartening that we do not report the failures of the generals and national security leaders. I find it shocking that we essentially condone continued American bumbling in the Middle East and now Africa through our ho-hum reporting," Arkin laments.

The journalist notes that he has consistently stood against this tendency, remaining critical of "the absence of any sort of strategy for actually defeating terrorism, annoying the increasing gaggles of those who seemed to accept that a state of perpetual war was a necessity." These gaggles, he later notes, include his editors at NBC, with whom he continually fought.

However, while he notes a certain similarity to Trump in that he tends to favor isolationism over interventionism, Arkin is careful to note the president is "an ignorant and incompetent impostor."

"For me I realized how out of step I was when I looked at Trump's various bumbling intuitions: his desire to improve relations with Russia, to denuclearize North Korea, to get out of the Middle East, to question why we are fighting in Africa, even in his attacks on the intelligence community and the FBI."

"Of course he is an ignorant and incompetent impostor. And yet I'm alarmed at how quick NBC is to mechanically argue the contrary, to be in favor of policies that just spell more conflict and more war. Really? We shouldn't get out Syria? We shouldn't go for the bold move of denuclearizing the Korean peninsula? Even on Russia, though we should be concerned about the brittleness of our democracy that it is so vulnerable to manipulation, do we really yearn for the Cold War? And don't even get me started with the FBI: What? We now lionize this historically destructive institution?"

Arkin isn't all venom, though. "[D]espite many frustrations, my time at NBC has been gratifying," he writes, noting that he's "proud of the work I've done with my team and know that there's more to do." He characterizes his departure as mostly seeking a break and the genuflection and perspective that comes from that.

Twitter/Yahoo
'Let's Go Back to Work': Acosta Thanks Judge for Decision to Temporarily Restore His Press Pass to White House

"I particularly feel like the world is moving so quickly that even in just the little national security world I inhabit, I need more time to sit back and think. And to replenish," he writes.

"There's a saying about consultants, that organizations hire them to hear exactly what they want to hear. I'm proud to say that NBC didn't do that when it came to me," Arkin said. "Similarly I can say that I'm proud that I'm not guilty of giving my employers what they wanted. Still, the things this and most organizations fear most — variability, disturbance, difference — those things that are also the primary drivers of creativity — are not really the things that I see valued in the reporting ranks."