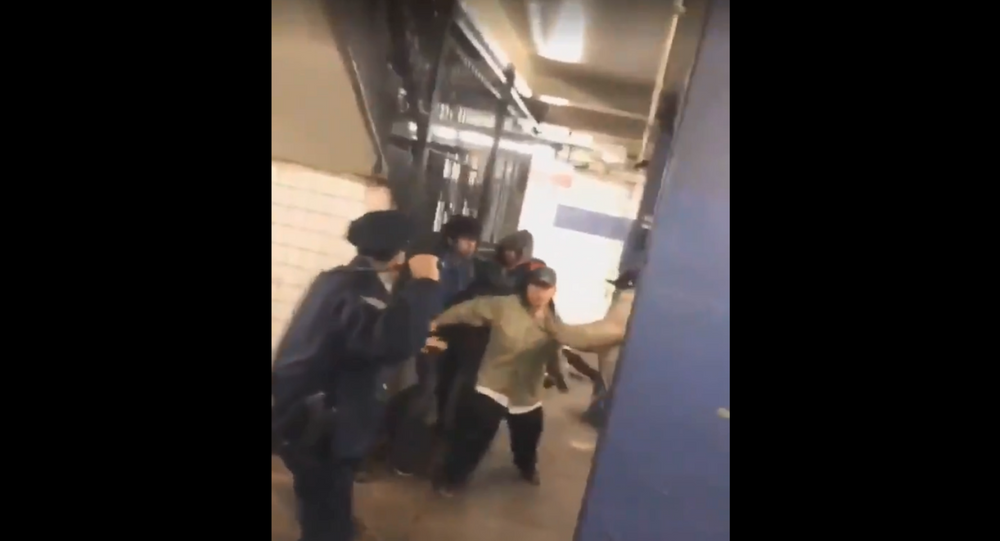 Sayed Ali, an officer with the New York Police Department and a US Army veteran, is being praised this week for the professionalism he exhibited during an incident in which a group of homeless individuals attempted to attack him.

The attack, which took place on Sunday, occurred moments after Ali was approached by a commuter at the East Broadway subway station and informed that she'd been harassed by a group of men at the F train stop.

Footage of the incident begins after Ali confronted the group, urging them to cease their behavior. However, rather than heeding Ali's warnings, the group instead opted to surround the officer.

​"It's not going to happen… stand back, stand back," Ali can be heard saying as the mob gradually gets closer to him. "Hey, get back…. I don't want to hurt you."

The remainder of the video shows Ali holding off the group as he waves his department-issued baton before one individual lunges at him, subsequently falling onto nearby train tracks.

At one point, a commuter can also be seen attempting to deescalate the matter by getting in between the parties and urging the group of homeless persons to "get back" before the footage cuts off.

In an effort to prevent any further injuries to his fallen attacker, Ali later called on subway officials to cut the electric power to the tracks. Additional officers were also called to the scene. Ali did not sustain any injuries.

The five arrestees were identified as Oseas Garcia, Juan Munez, Raul Ruiz, Elisoe Alvarez Santos and Leobardo Alvarado, according to Stars and Stripes. All five were later hit with violations for laying on the platform before being released from custody.

In the days since the altercation, Ali's attempt to use the least amount of force instead of quickly going for his firearm has been praised by officials in the Big Apple.

"What extraordinary professionalism and bravery by NYPD Officer Syed Ali," Mayor Bill de Blasio tweeted on Tuesday. "Attacking our men and women in uniform won't ever be tolerated. The NYPD is upping its presence at this station and others to ensure officers have the support they need."

On Tuesday, Ali was also presented with a commemorative plaque by Councilman Chaim Deutsch (D-Brooklyn) at the NYPD Transit Task Force headquarters in Brooklyn.

​However, the decision by the Manhattan district attorney's office to not charge the men with attacking the officer hasn't exactly been accepted warmly by those linked to the police force.

"These men chose to drink to excess and then to attack a police officer like a pack of jackals when given a lawful order to move on," Patrick Lynch, president of the Patrolmen's Benevolent Association of the City of New York, said in a statement.

"They should be held accountable for their actions," he added, stressing that the district attorney's job was to "prosecute crimes, not to act like a social advocate."

According to local media reports, the location at which the incident occurred is a hotspot for homeless individuals. The group reportedly returned to the site of the fracas after being discharged, the New York Daily News reported.

NYPD Sergeant Under Investigation for Stuffing Panties into Detective’s Mouth