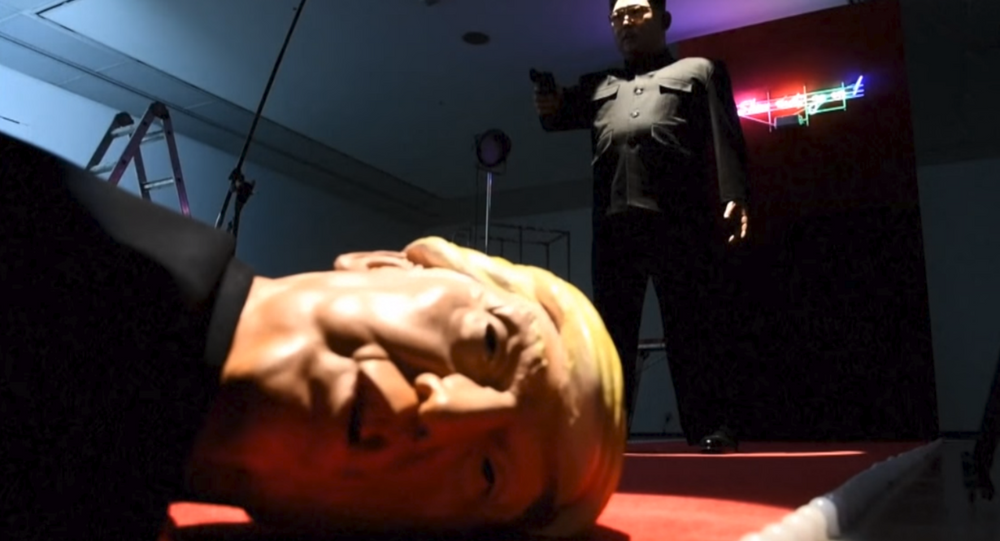 Lying on the ground of South Korea's Seoul Arts Center is a sculpture of US President Donald Trump, and standing just a few short feet away is North Korean leader Kim Jong Un with a pistol in hand.

While not a depiction of a real-life event, the scene is the creation of South Korean artist Lim Young Sun. The installation, titled "The Show Must Go On," is meant to give art lovers a peek into a political show in which Kim shoots Trump after the pair get into an argument over money.

The installation itself is arranged as if the two world leaders are on a film set, with light fixtures and cameras pointing at each sculpture to capture the intensity of the moment. Next to a lifeless Trump is a briefcase filled with $100 bills. Behind Kim, a colorful neon slogan states, "The show must go on!"

"I just wanted to show our political reality we live in, in which citizens get nervous, anxious and happy watching their [the leaders'] every single move as if they are watching a movie," Lim told AFP.

"Both leaders are masters of political shows and using the tension created by their hostile rhetoric for their own political gain at home… but what they are lacking seems [to be] sincerity."

While the week-long display did draw large audiences, not all visitors were thrilled with Lim's satirical work. "Some people angrily told to my face, ‘Artists like you are jeopardizing our ties with the US and national security,' while some others, apparently not Trump fans, said this piece gave them catharsis," Lim said.

Although the exhibition came to a close on Wednesday, it is expected to be showcased again in 2019 in South Korea. The work may even go international, according to Lim.