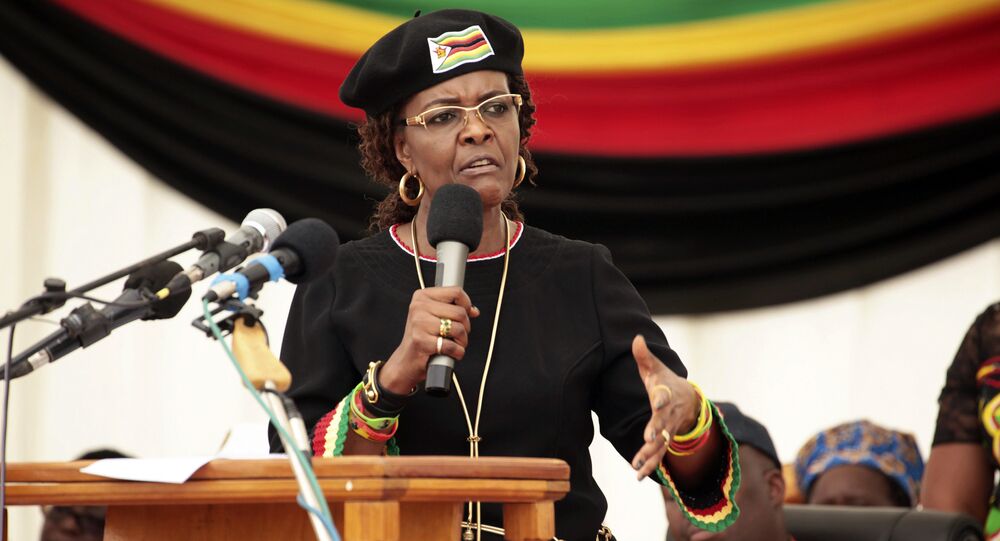 South African authorities have issued an arrest warrant for Grace Mugabe, the wife of former Zimbabwean President Robert Mugabe, for the alleged assault of South African model Gabriella Engels at a hotel in Johannesburg in August 2017.

"I can confirm that a warrant for the arrest of Grace Mugabe was issued last Thursday," South African Police Service spokesperson Vishnu Naidoo said, according to multiple media sources. Naidoo also noted that police were seeking assistance from the International Criminal Police Organization (Interpol) to help enforce the warrant. Interpol is an international organization that coordinates police cooperation across nations.

In August 2017, Engels claimed that a gaping cut in her forehead was the result of her being hit with an extension cord and plug by the then-Zimbabwean first lady after she found Engels in a hotel room in the Sandton suburb of Johannesburg with her sons Robert Mugabe Jr. and Chatunga Mugabe, who were 25 and 21, respectively, at the time.

Mugabe has repeatedly denied assaulting Engels, claiming instead that the "intoxicated and unhinged" model attacked her with a knife when Mugabe entered the hotel room.

​Following the incident, Mugabe was granted diplomatic immunity by South Africa's former Minister of International Relations and Cooperation Maite Nkoana-Mashabane. Diplomatic immunity ensures that diplomats are immune to lawsuits or prosecution under a host country's laws.

In November 2017, the Zimbabwean military forced Robert Mugabe to resign from the presidency after confining him to house-arrest in a move that was widely seen as an attempt to prevent Grace from succeeding him as the country's leader. Emmerson Mnangagwa, the country's vice president at the time, stepped in to fill the position.

"He [Mnangagwa] could never have assumed the presidency of the country without the army. The army made sure that the other organs of state were neutralized. We must undo this disgrace which we have imposed on ourselves; we don't deserve it," Robert Mugabe said then, Sputnik previously reported.