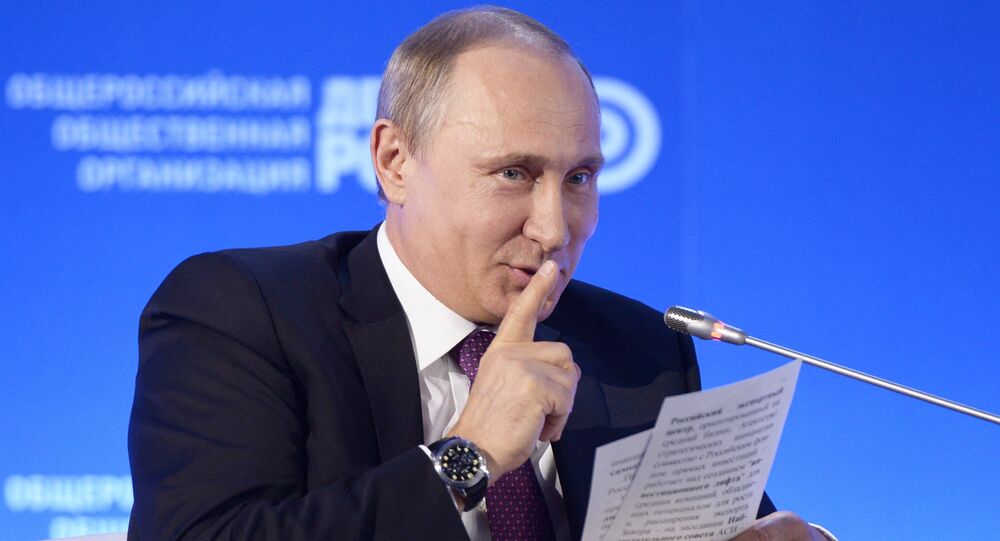 ‘Back in the Cold War’: Vladimir Putin Makes Appearance in DC Comics’ Latest

In DC Comics’ latest comic, Russian President Vladimir Putin is a character ‒ and he declares war on the United States.

In the new eighth issue of "Watchmen" sequel "Doomsday Clock," Putin plays a short but pivotal role in the development of the story, much of which takes place in Russia.

According to comicbook.com, the issue begins with the superhero Firestorm in the middle of a crowd in Russia, a crowd he soon accidentally turns into glass with his powers. This sets in motion an international incident in which Putin meets Superman, with whom he is briefly chummy, before using the humans-transformed-into-glass business as a pretext for declaring war on the United States.

​Why the US? Well in the "Doomsday Clock" universe, it's widely held that the US government is directly responsible for the abundance of people with superpowers, using them as a way to destabilize rival nations and dominate global affairs, Syfy explains.

At a press conference after the incident, the Russian president says, "They have been amassing an army covertly for more than a decade," promising to hold anyone connected to Firestorm accountable for what happened. In other words, in lieu of Firestorm, Putin will settle for the US of A.

But the issue has more political injections too, indicative of the day and age in which it was made. A screenshot obtained by Sputnik could've been written by an artist at the US State Department, alleging that a young superboy from Douma that Firestorm and Superman meet not only escaped from a gas attack by Syrian President Bashar al-Assad that killed his family, but also from child slavery.

The issue ends with a surprising revelation about Firestorm creating one hell of a cliffhanger, but it's unclear if the Russian president will make another appearance in later issues.

Bleeding Cool reported on Saturday that DC Comics had cleared the Putin appearance and plot with the Russian government beforehand, but that despite the effort, the comic was leaked early on the internet anyway.

"I'd prefer to think that DC and Warner Bros aren't naïve enough to actually leak it themselves, however they aren't above getting the publicity they can out of having someone else do it. It is the American way after all," comic book aficionado, amateur comic creator and former art professional Adam Robinson told Sputnik Thursday.

"I don't know what's funnier, that Russia punked DC Comics or that Russia and Putin exist in a world filled with fictional cities, like Gotham, Metropolis and that ambiguous Middle Eastern country that works as a stand in for any Persian Gulf country," he said.

"It makes sense for DC to do this," Robinson said. "I mean we're kinda back in the Cold War again in real life, and ‘Watchmen' is becoming real in DC, so why the heck not? Yes, it's a way of creating buzz, it's capitalism and it's comics; these things happen all the time. Is the story any good? I guess?… Do the politics of it make any sense? No, they really don't… But like I said, that's capitalism."

At least for this Sputnik writer, though, their favorite appearance of Putin in a comic book will always be "Chelovyek Kak Vsyo," in which Putin teams up with Russian Prime Minister Dmitry Medvedev and the Invisible Man to save Moscow from terrorists and zombies alike.