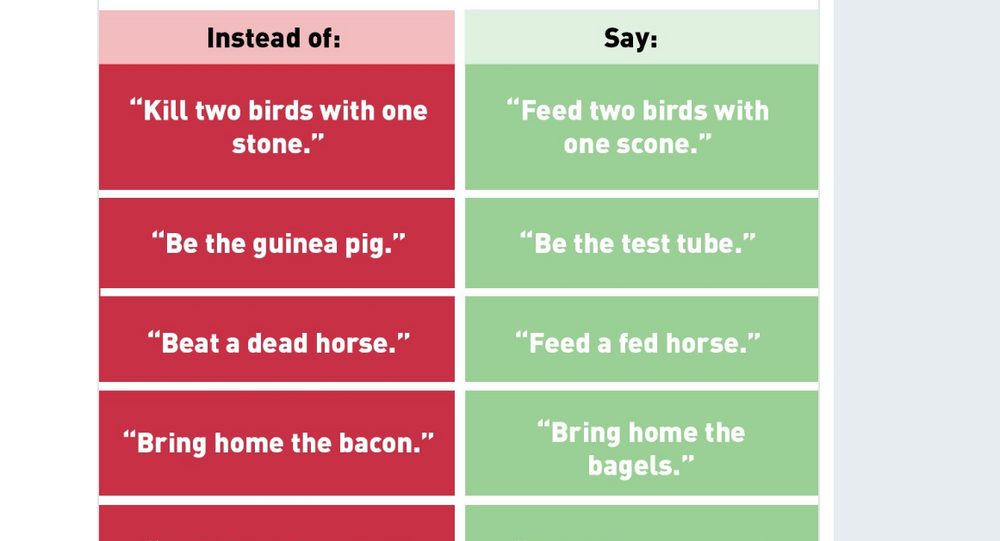 Have you ever dared to use the phrase “bring home the bacon”? If so, you better replace that with “bring home the bagels,” according to animal rights organization PETA (People for the Ethical Treatment of Animals), which compared animal-referencing idioms to homophobic and racist language.

In a tweet Tuesday, PETA posted a list of common idioms such as "Kill two birds with one stone" and "beat a dead horse," with phrases they deem more acceptable, like "feed two birds with one scone" and "feed a fed horse." The tweet, which has been shared almost 10,000 times in 24 hours, includes the caption, "Words matter, and as our understanding of social justice evolves, our language evolves along with it. Here's how to remove speciesism from your daily conversations.

"Just as it became unacceptable to use racist, homophobic or ableist language, phrases that trivialize cruelty to animals will vanish as more people begin to appreciate animals for who they are and start ‘bringing home the bagels' instead of the bacon," PETA added in a comment on its tweet.

​And of course, Twitter users had plenty of their own opinions.

​While some accused PETA of trivializing race and gender issues, others said the organization was giving vegetarians and vegans a bad name. And as you might expect, there was an onslaught of catty comments that involved a lot of animal-based idioms.

​PETA's tweet comes after UK-based academic Shareena Z. Hamzah of Swansea University wrote in The Conversation last month about how "metaphors involving meat could gain an increased intensity if the killing of animals for food becomes less socially acceptable."

"If veganism forces us to confront the realities of food's origins, then this increased awareness will undoubtedly be reflected in our language and our literature," she wrote.