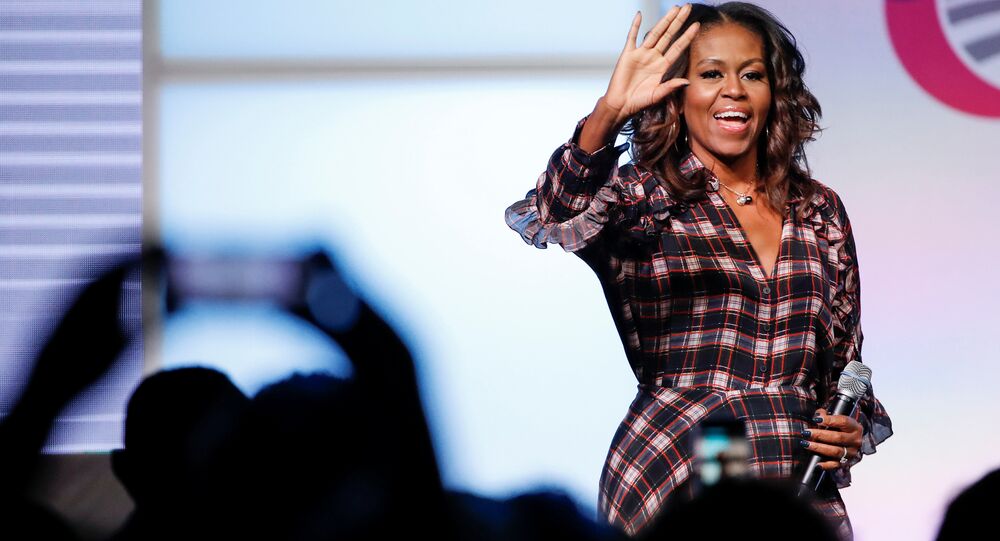 And the Winner is: Michelle Obama’s Memoir ‘Becoming’ is 2018’s Bestselling Book

Former US First Lady Michelle Obama’s memoir, titled “Becoming,” has sold more copies than any other book published this year.

American book publisher Penguin Random House announced on Friday that the former first lady's book had sold over 2 million copies in all formats and editions in the US and Canada alone during the first 15 days of its publication.

"BECOMING is in its second week at #1 on two New York Times bestseller lists: Hardcover Nonfiction and the Combined Print and E-Book Bestsellers. It is also #1 on the USA Today and Publishers Weekly bestsellers lists," the publisher said in a news release.

In her book, Obama chronicles her childhood on the south side of Chicago, her career as a lawyer as well as her relationship with US President Barack Obama. The last third of her book follows Obama's journey through the White House and has gained a fair amount of notoriety for its swipes at US President Donald Trump.

At one point in her memoir she writes that she stopped "even trying to smile" when Trump was being sworn into office in January 2017.

"Someone from Barack's administration might have said that the optics there were bad — that what the public saw didn't reflect the president's reality or ideals. But in this case, maybe it did. Realising it, I made my own optic adjustment: I stopped even trying to smile," she said, referring to Trump's inauguration speech.

She also claimed that she would "never forgive" Trump for spreading the "birther" conspiracy theory — a false assertion that President Obama was born in Kenya and was therefore ineligible to be a US president.

"The whole [birther] thing was crazy and mean-spirited, of course, its underlying bigotry and xenophobia hardly concealed. But it was also dangerous, deliberately meant to stir up the wingnuts and kooks. What if someone with an unstable mind loaded a gun and drove to Washington? What if that person went looking for our girls? Donald Trump, with his loud and reckless innuendos, was putting my family's safety at risk. And for this I'd never forgive him," she wrote.

As with any item of popular culture, many, including Trump, claim that the book is based solely on politically motivated rhetoric.

"She got paid a lot of money to write a book and they always insist that you come up with controversy. I'll give you a little controversy back, I'll never forgive [Obama] for what he did to our US military. It was depleted […] and I had to fix it," Trump previously claimed, cited by Reuters.

According to a Penguin Random House news release, Obama is currently on a 10-city US book tour.

Already in its sixth printing, Obama's memoir has sold an estimated print 3.4 million copies in the United States and Canada, according to the Washington Post.

Twitter on Fire: Barack and Michelle Obama to Partner With Netflix