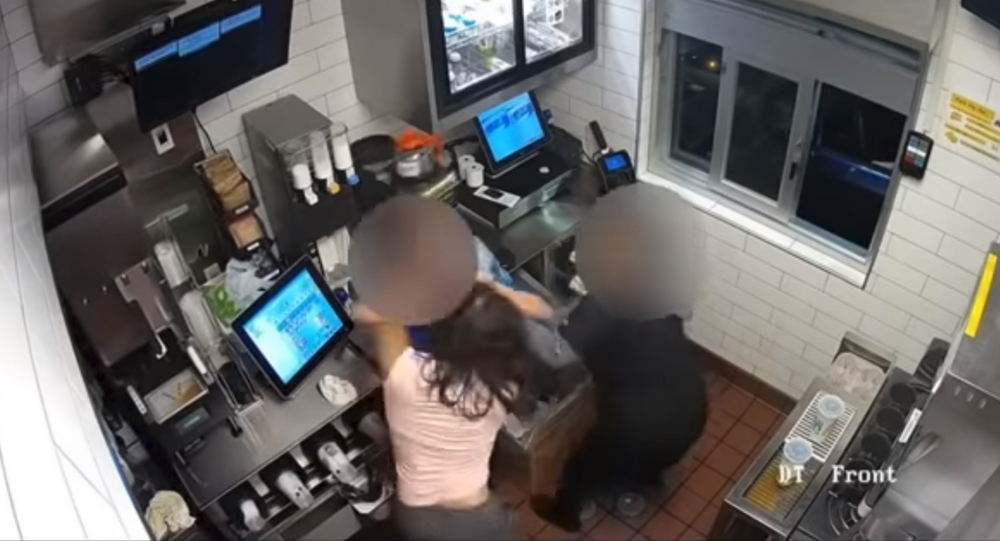 California's Santa Ana Police Department released surveillance footage on Tuesday of a customer physically assaulting a McDonald's employee in an effort to get the public's help on locating the alleged offender.

The altercation, which took place on October 27 at roughly 11 p.m. local time, was reportedly set off after the customer received an insufficient amount of ketchup packets when she picked up her order at the drive-thru window, according to the department.

Unsatisfied, the unidentified woman later hopped out of her vehicle and proceeded to enter the fast food restaurant via an employee back door. Things quickly escalated, with the woman launching a full-scale attack on the manager after she was informed that she was in a restricted area.

​"When the store manager said she could not be in the building, the suspect became combative," police said in a statement. "The suspect pushed, punched and choked the victim."

Footage also shows the individual slamming the manager's head against a soda machine in the kitchen area before shoving her against the drive-thru window.

Though another employee is seen trying to separate the pair, it's not until a man believed to be with the ketchup lover intervenes that the brawl is called to an end. Additional security footage later shows the woman and man leave the establishment without further incident.

"The manager tells her, ‘I'll be glad to help you, you just need to go up front,' and for whatever reason, she took it upon herself to assault the manager," Cpl. Anthony Bertagna, of the Santa Anna PD, told Los Angeles news station KABC.

"There is no reason that any employee at any business should be assaulted by a patron, much less over not getting enough ketchup."

Bertagna also told news station KTLA 5 that investigators are hoping to get in touch with the man who was able to remove the woman from the grounds; however, he is not wanted for any of the crimes committed.

"We're actually grateful for the service he provided; he stopped the assault. But… we believe if you don't know her, but you might know him — our intent is to get her identified," Bertagna said. "She's the one that committed the crime."

Larry Kaplan, the owner of the McDonald's franchise, told Sputnik on Wednesday that his restaurant is cooperating with law enforcement officials in their efforts to track down the wanted woman.

"Our biggest priority is always the safety and well-being of our employees and customers at our restaurants," Kaplan added.

Police have described the woman as a Hispanic female with brown hair. They believe is she between the ages of 20 and 25. Residents with information are urged to get in contact with the Orange County Crime Stopper or PIS L. Delisle at (714)245-8647.

This latest McDonald's fracas comes after a McDonald's employee in South Carolina was charged with third degree assault and battery last week after she slapped her manager while trying to force-feed her bacon, according to the Island Packet newspaper.