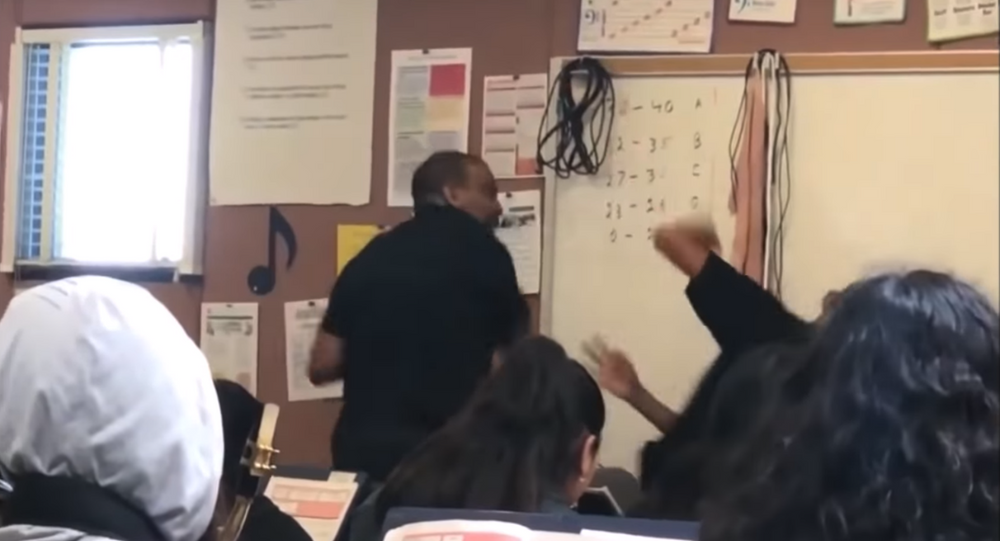 A GoFundMe campaign launched in support of Marston Riley, a California high school music teacher who was arrested last week for brawling with a 14-year-old student, has gone viral, collecting more than $30,000 beyond the fundraiser's initial $50,000 goal.

The campaign, which was launched on Saturday by Cecilia Jimenez, a former teacher at Maywood Academy High School, has collected more than $84,000.

"We all may have mixed feelings about what happened, but please do know that this is not the first time that Mr. Riley is attacked; physically or verbally," Jimenez wrote in the campaign's bio. "He is a great person and a great teacher."

Riley was arrested on Friday on the suspicion of child abuse after a physical altercation between him and a student unfolded during class. Video footage shared on social media shows the unidentified student verbally harassing Riley and tossing a basketball at him before the instructor loses his cool and throws the first punch.

​Riley is filmed dishing out roughly 17 shots at the student, even pushing him to the ground before other students and school officials move to break up the brawlers at the front of the classroom. After the match was brought to a close, the 14-year-old student continued to mouth off, video shows.

The fight reportedly broke out after Riley requested the teenager to leave the classroom because he failed to wear a proper uniform, according to local news station KTLA.

© CC0
‘They Should Be Expelled': US High School Marching Band Spells Out Racial Slur at Game (PHOTO)

According to NBC Los Angeles, Riley was attacked by three students last year.

Students who later spoke with KTLA on the condition of anonymity claimed that the attack on Riley was part of a setup designed by teens in the classroom. "Everything was planned out," one said.

"There were students there who were already taking out their phones to record the incident. I don't think it's completely fair that they're just putting the blame all on [Riley], when I personally know that he's a good guy."

Though dozens of students have spoken out and shown their support for Riley, several parents have done the exact opposite, expressing their outrage over the teacher failing to keep his composure, the LA Times reported.

The Los Angeles Unified School District released a statement following the attack, noting that members were"extremely disturbed" after being informed of the incident.

"We take this matter very seriously and do not condone violence or intolerance of any kind," the statement reads. "Los Angeles Unified is cooperating with law enforcement in investigating this incident. Crisis counselors and additional School Police patrols will be at the school on Monday to support our students and staff."

Riley is scheduled to be arraigned on November 30. The case is being investigated by the Los Angeles County Sheriff's Department Special Victims Bureau.