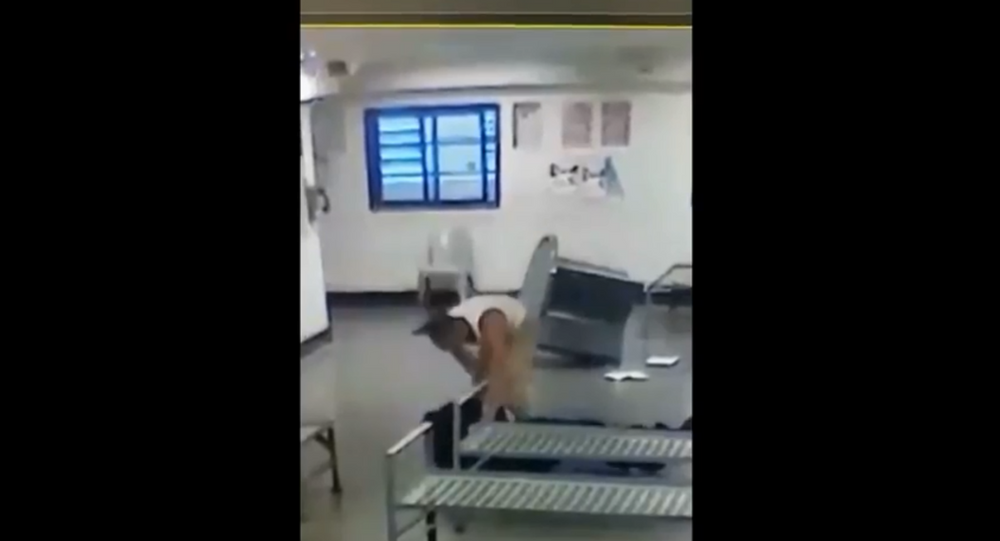 The footage, which appeared online over the weekend, shows the pair pushing one another in the common room before the inmate manages to get behind the officer and toss him on his back. Pinned to the ground, the correctional officer is hit with six more punches as the inmate stands over him.

Surveillance footage later shows the duo move into a nearby hallway, where the inmate shoves the correctional officer into an adjacent room. Two other inmates can be seen approaching the scene to check out the commotion as the first inmate goes to toss a trash can at the officer. It's unclear if it actually struck the officer, as he was standing out of the camera's frame.

​According to the New York Daily News, the inmate was identified as Rickeem Parker and the officer as Bronoski Jean-Philippe. The altercation, which took place October 5, reportedly began after Parker "became aggressive" and decided to throw a desk on the floor.

The surveillance footage made headline news after it was posted to a Facebook page that is "operated by a retired jail supervisor," the Daily News reported.

Jason Kersten, spokesperson for the Department of Correction for the City of New York (NYC DOC), told the New York Post in an article published Sunday that Parker was placed in "restrictive housing" before being transferred out of the agency's custody.

"We are using every tool possible to help officers do their jobs in a secure environment," Kersten said. "Thankfully, our officer was not seriously injured."

Though it wasn't immediately known why additional officers failed to respond to the brawl, Elias Husamudeen, the president of Correction Officers' Benevolent Association Inc., told the Post that the incident demonstrated why the "inmate ratio in the NYC DOC needs to change."

Earlier this year, the administration of New York City Mayor Bill de Blasio announced its intention to shut down the Rikers facility and replace it with four borough-based detention centers in an effort to "promote safety and support for the people who work and reside within them," according to an August press release.

This move, however, isn't sitting well with Husamudeen, who went on to tell the Post that similar attacks won't be prevented by the Blasio administration's plans. "Building four new jails is not going to reduce violence as long as correction officers remain outnumbered and without the tools they need to maintain law and order," he said.