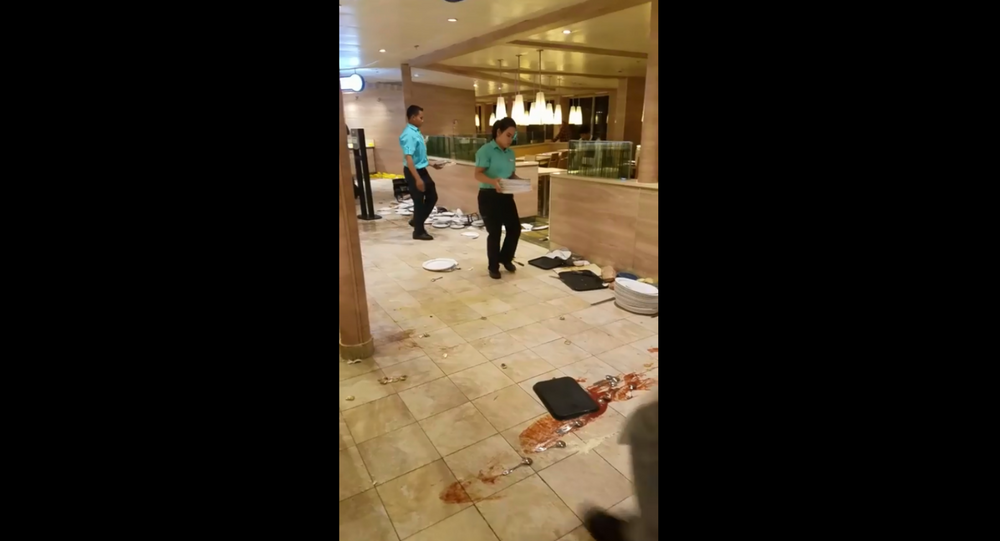 A technical issue sent a Carnival cruise ship listing to one side earlier this week, striking terror into the hundreds of passengers aboard and sending plateware crashing to the ground.

The incident took place on Sunday, a few hours after the Carnival Sunshine vessel departed from Florida's Port Canaveral to its intended destination in the Dominican Republic. Footage shared on social media shows passengers trying to get their bearings as staff members work to get a handle on the situation.

Kyla Williams, a passenger aboard the vessel, told CBS New York that that tilt was so severe that her husband had to hold her so she wouldn't fall.

"I was shifting, falling out of my seat," Kyla Williams, a passenger aboard the cruise, told CBS New York. "This was very much the ship rolling to one side and everything falling down from that and it was just something you'll never forget."

Another passenger, David Crews, told Florida's News 6 station that he'd never experienced such an incident on his prior cruise travels.

"I didn't think anything of it, since it's not uncommon for ships to rock back and forth. But it didn't rock back. It kept leaning," Crews told the station. "Plates and silverware started sliding off the tables. Then the tables themselves started to slide. Glasses and plates started to fall and shatter."

"At this point, it was pure chaos. Screams. Cries. Panic," he added.

Anne Marie Mathews, a spokesperson for Carnival Cruise Line, told Sputnik Friday that there were approximately 3,000 passengers onboard when the incident took place.

​After the ship was leveled back to normal and order was restored, all scheduled events resumed aboard the Caribbean cruise. It wasn't until the following day that passengers received a letter from the captain that indicated a technical issue with the electronic switchboard caused the ship's fin stabilizer to become activated.

"It's important that fin stabilizers are not a safety feature; they are deployed solely for guest comfort to minimize any potential ship motion while at sea," the letter explained. "There was never any issue with the safe operation of the shop and our officers quickly intervened to correct the situation."

The letter added that passengers would be given a $50 voucher over the mishap.

​Despite assurances from the captain, eight passengers, including the Williams family, flew back home after docking in the Dominican Republic on Tuesday, according to Mathews. The Carnival Sunshine, known as one of the oldest ships in the company's fleet, took to the seas in 1995 under its previous name, the Carnival Destiny.