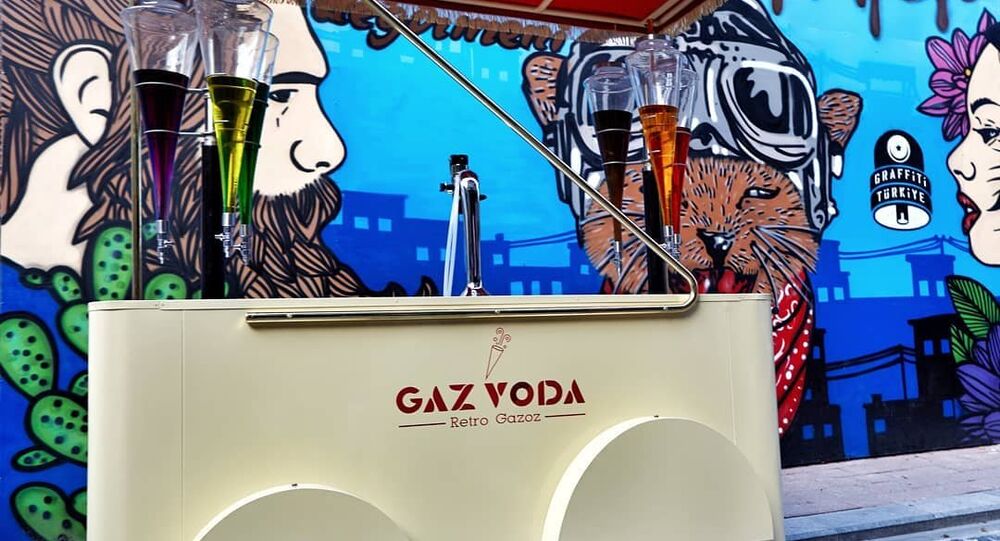 Although Muslim Turkey is only known for one brewer, Efes, it can boast a wide variety of soft drinks. While a wide domestic range of 'gazoz' soda brands predominated in past decades, many have proven unable to compete with the heavyweights of international sugar water, Coca-Cola and Pepsi.

While Turkey was still gulping down gazoz in the seventies, the neighboring Soviet Caucasus was offering compatriots from throughout the country soft drinks like pear soda and tarhun, which became an instant hit. Now one Russo-Turkish entrepreneur hopes to introduce Turkey to a new array of foreign flavors with the Soviet-style soda GazVoda.

Syuzana Askarova, daughter of a Russian mother and a Turkish father, has decided to bring Soviet-style soda flavors to Turkey. She's started a small shop selling different flavors of soda in Kadıköy, an Istanbul neighborhood on the Asian side of the Bosporus known for its nightlife. Syuzana started to sell the drink at various events and music festivals, and soon the woman noticed that GazVoda had sparked the interest of locals.

© Sputnik / Yuriy Lushin
Soviet People Had Fun, Too
14
Askarova told Sputnik of the drink's history, as well as her promotional plans and activities. She also explained why GazVoda has every chance to surpass its American rival in terms of popularity.

"We've done some market research, and then started to sell the drink at festivals and Armenian foundation meetings. That was the first step, to get the locals to taste the new soda. The soda-making process using some colored syrups has turned out to be of most interest. Our soda flavors are something that Turkey hasn't seen or tasted before; so, when people have tasted our drink, they loved it," Syuzana said.

According to Askarova, GazVoda differs from Turkish soda; it has different and far more intense flavors. The shop also sells non-alcoholic mulled wine and winter teas that are perfect for chilly weather. The woman also plans to add some more flavors to her array of drinks; Turkey will get the chance to taste chocolate and vanilla-flavored soda after the New Year.

"In the Soviet times, that soda was the only carbonated drink we had. Unfortunately, today we don't have a number of things we used to have in our childhood. As for GazVoda, our goal is to try and recreate that high-quality Soviet-style soda flavor. Our flavors are unique; they're all based on Russian recipes. We've got a lot of Russian customers. When entering the shop people can't but wonder whether it's the same soda they used to love back in their childhood," she says.

© Sputnik / Boris Kavashkin
Back to USSR: Sneak Peek of Soviet Youth's Daily Life
21
Askarova says their main idea was to educate Turks about the cultural aspects of Soviet history; to show them the lifestyle and eating habits of the period.

"The drink has a really interesting history. In 1952, US President Henry Truman sent a box full of Coke bottles to Stalin; back then there was a tradition of preparing small presents bearing certain meanings. Russian state officials loved the drink, but, of course, selling something American was out of question in the Soviet Union, so they decided to come up with a similar drink that had to have a truly Soviet brand name… The drink got a lot of State support and it was soon sold in every Soviet Republic. Even though the Soviet Union collapsed, some countries still sell the famous drink," Askarova said.

According to Askarova, during the Soviet Union's final years, the Soviet soda was even marketed in the US. However, GazVoda was thought to be an American product as its history isn't known there.

"Some of my US friends think that we export our soda from America. The thing is that a lot of people just don't seem to know the story of our product. Moreover, there is some pressure in the US in this regard, to present GazVoda as a domestic product," the woman said.

As for Askarova's plans, she wants to add some more Russia-style flavors to the line: "We're going to have three or four kinds of Russian desserts and two different kinds of Russian pierogis. We're going to sell some famous and beloved Russian desserts that the Turkish customer has never seen before. We want to start celebrating Russian Old New Year here, and thus increase our popularity," she concluded.