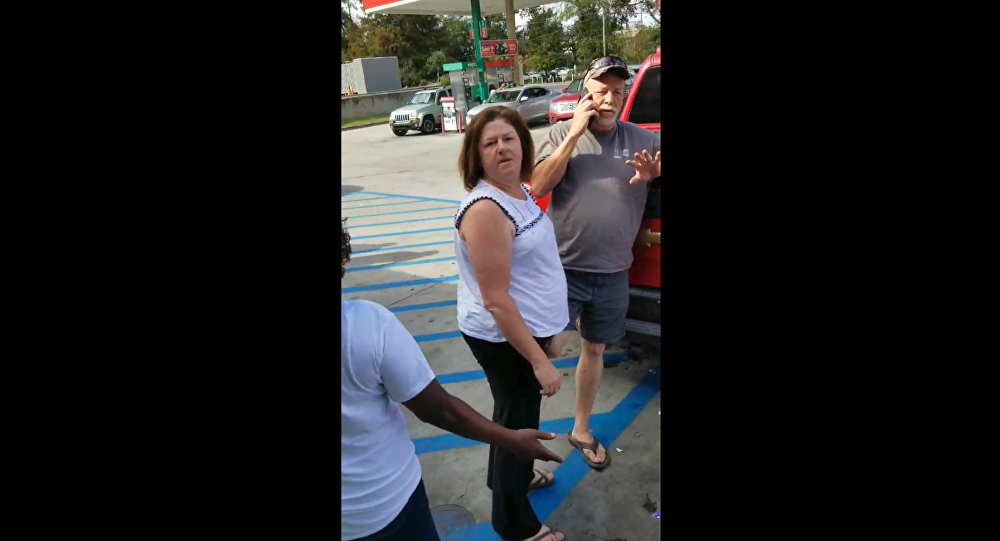 A white woman from Charleston, South Carolina, was named "Gas Station Gail" by netizens this week after she was filmed calling the cops on a group of black residents participating in an anti-violence march in the area.

The woman phoned the cops moments after demonstrators, composed of mostly young adults and their parents, arrived at the local Murphy Express convenience store on Sunday to purchase drinks.

Jonathan Thrower, who also goes by the name Shaken Akhet, posted video of the altercation on Facebook. The video shows the woman, later identified as Brenda, speaking with the police dispatcher while repeatedly urging Thrower to stop filming her.

"I thought she was playing at first," Thrower told The Charleston City Paper in an article published Tuesday. "I didn't really think that was gonna happen."

In police recordings obtained by City Paper, the woman is heard telling the dispatcher that the locals were "absolutely destroying the outside area of the store" and that some were even going as far as turning the gas pumps on and off. Video footage does not show anyone near the pumps, rather many are standing on the sidewalk by the store's entrance.

"They're standing outside my store, they're videoing us and everything, I need a police officer here now," she said. "I mean, it's like a riot out here."

Though marchers were initially instructed by a store employee to remain on the sidewalk, it's unclear if the employee they are referring to is the woman who phoned the police. Thrower has indicated that the woman was the store manager; that has not been confirmed.

After repeatedly being asked whether she was in danger and if anyone had laid hands on her, the woman clarified that she was in fact safe.

By the time officers from the North Charleston Police Department arrived, the group had moved away from the store to continue their march. Spencer Pryor, a spokesperson for the department, told the City Paper that no report was filed over the matter.

"The North Charleston Police Department — I applaud them, because the guy was like, 'You know, they're just coming in to purchase something. I'm sure they‘re not causing any trouble,'" Thrower told the publication of the incident.

Murphy USA, the parent company of the convenience store, told City Paper that they'd been informed of the 911 call and had already begun a review of the interaction. "Approximately 30-40 people were gathered outside the location at the conclusion of a local community event," the statement reads.

"A Murphy USA employee approached the group and requested they leave the premises. After members of the group refused to leave, a call was made to law enforcement."

The Murphy statement went on to explain that fuel pump shut-offs had been "caused by an external emergency fuel stop button."

The "Stop the Violence" march is a recurring community event intended to bring both residents and police officers together to raise awareness about violence. The event has often seen the participation of North Charleston Police Chief Reggie Burgess, who most recently took part in the October 1 march, according to City Paper.