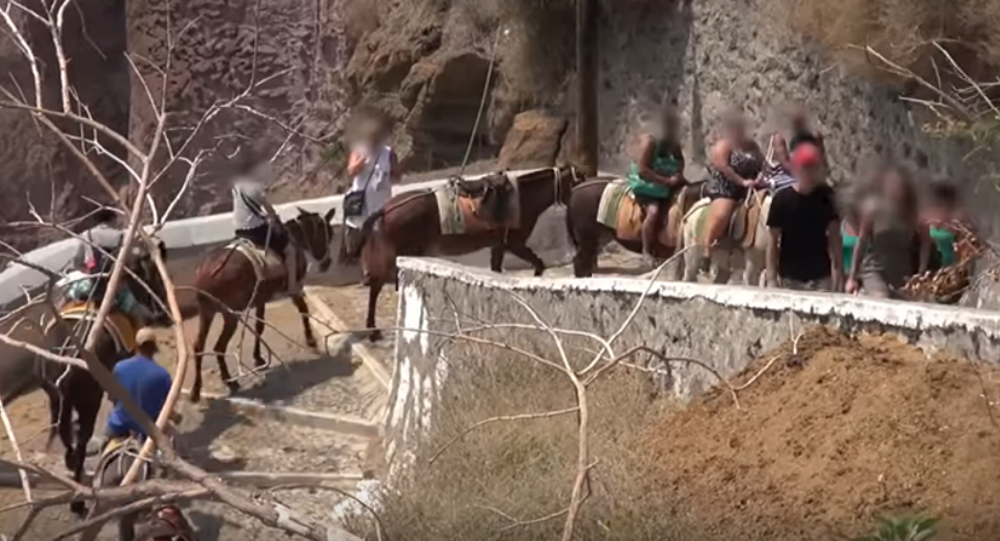 In a fight for equine rights, the Greek island of Santorini has banned “obese” tourists weighing more than 220 pounds from riding donkeys after animal rights activists said donkeys were being left with spinal injuries and open wounds from saddles.

Tourists visiting the popular island, which is known for its hilly terrain, often ride donkeys up slopes from the beaches to the island's main town of Fira. However, sightseers who want to ride the donkeys will now have to weigh less than one-fifth of the creature's body weight.

According to the Greek Ministry of Rural Development and Food, the animals "should not be loaded with a weight excessive in size, age or physical condition." The guidelines were instituted after the department received multiple complaints about the ill-effects of heavy weight on the animals, particularly during the busy summer season.

A petition by Holly Ann created about a year ago on Change.org states, "The island [of Santorini] has a long path that stretches from the port below to the city centre at the top of the volcanic rock."

"Despite the fact that it's only a 30 minute walk (depending on how fast you are — that's how long it took me) or 2 minutes by cable car, these donkeys are used as cruel transportation for people who want the 'real Greek' experience," the petition adds.

"These donkeys are forced to stand around in the sun in their own faeces at the side of the path and all they do is go up and down, up and down carrying people who are too lazy to just walk or take cable car. In addition, the farmers give them lashings to make them go faster up the path when carrying tourists etc." The petition, which is currently closed, has more than 100,000 signatures.

Elisavet Chatzi, a 45-year-old woman from Athens who participated in protests against the treatment of donkeys in Santorini earlier this year, called the ban "a very big step," Metro reported Tuesday.

"The situation in Santorini has been going on for many years and it cannot be resolved in one day. We have won our fight because of the international media attention on the topic. No one could ever believe that new regulations would be set," she added.

© AP Photo / Vassilis Tsiairis
In the Ocean Deep: What You Don't Expect to See While Diving in Greece
12

"The Greek restriction on donkey labor is a positive step towards a world in which we no longer view animals as objects to use, but respect them as the feeling individuals we know them to be," Matt Johnson of the organization told Sputnik in an email Wednesday.

People for the Ethical Treatment of Animals (PETA) has a running petition on their website called, "Donkeys on Santorini Abused and Used as Taxis: Please Help Them!"

However, according to PETA Foundation UK Director of International Programmes Mimi Bekhechi, the new measure is a "throwaway, insulting, bald, and wretched gesture that won't prevent the daily suffering that these donkeys endure."

"Even if it's enforced — and no other measures have been so far, including the requirement that animals be provided with water and shade from the sun — donkeys can still be forced to carry a person weighing 220 pounds up more than 500 steep steps four to five times a day, even though veterinarians recommend that an average-sized donkey carry no more than 72 pounds!" Bekhechi told Sputnik Wednesday.

"When the donkeys aren't being made to carry heavy tourists on their backs and being goaded with sticks — which they are even when they're ill or injured — they're still suffering. Many have painful wounds — fresh injuries and old, often untreated ones that have scarred over — caused by ill-fitting saddle girths and other tack. PETA has made it clear that Santorini must stop these rides, and we're calling on tourists to refuse to participate in this abuse and to use the port's cable car instead," she added.