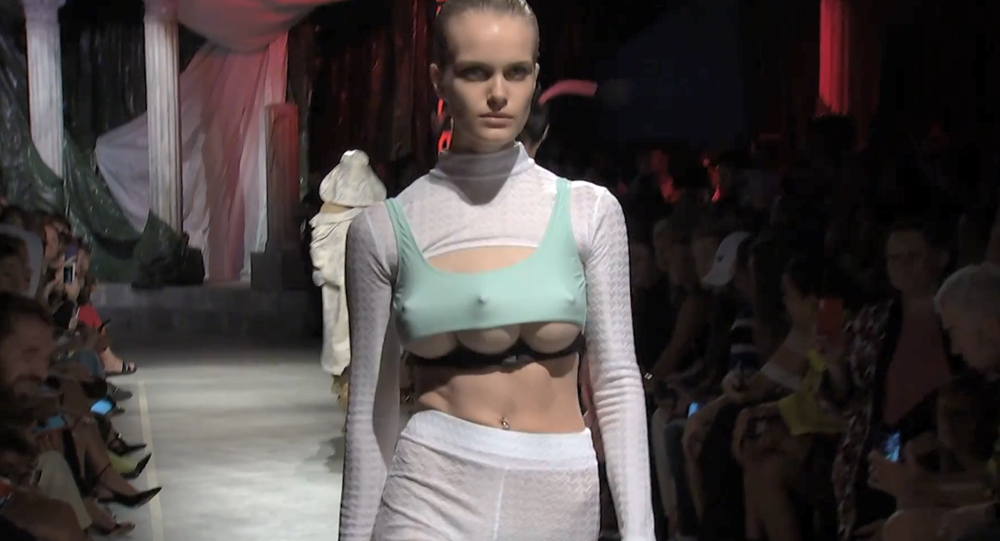 Italian fashionistas drew attention to the dystopian future forming around us with some shocking styles inspired by cyberpunk aesthetics ‒ in particular, the three-breasted sex worker from the 1990 action/sci-fi film “Total Recall.” It contrasts the recent damning expose of female worker exploitation that underpins many Italian fashion brands.

At the GCDS Spring/Summer 2019 show on Saturday in Milan, models in neon tops, see-through dresses, shiny foil and utility clothing graced the catwalk with fashion inspired by the aesthetics of cyberpunk dystopia: a world that is a "combination of lowlife and high tech," as sci-fi author Bruce Sterling once put it.

However, none grabbed more attention than a pair of models who strutted out with a third prosthetic breast.

You can see the whole show here:

The brand GCDS, for "God Can't Destroy Streetwear," was founded by brothers Giuliano and Giordano Calza in 2015. Giuliano said the look was intended to serve as a "wake-up call."

The 1990 film starring Arnold Schwarzenegger is based on the 1966 Philip K. Dick short story, "We Can Remember it for You, Wholesale." In the film, Schwarzenegger plays a man who takes a virtual vacation to Mars by having a travel company implant fake memories of a trip to the Red Planet into his brain. But after an error in the procedure, fact and fiction get blurred as Schwarzenegger's character winds up deeper and deeper in a dystopian nightmare. Told he is really a secret agent and sent to Mars, he finds a colony whose inhabitants have been grotesquely deformed by improper radiation shielding from the nearby industrial facility, where he meets the character in question: a sex worker with a third breast, played by actress Lycia Naff. In the 2012 remake with Colin Farrell as the lead, Kaitlyn Leeb plays the part.

#AdForumCo
At the just conculded Milan fashion week in Italy, models with three breasts strutted down the walk-way as fashion label GCDS showed off their 'rave-ready' collection on models donning prosthetic breasts that poked out from under lycra sports bras. pic.twitter.com/TK2L9q2kbd

​Pedestrian noted that the GCDS show presented the company itself as an all-encompassing, militaristic iron fist that ruled the world, and lining the catwalk in glaring neon lights were the words "GCDS Corp is your only God." It's an image that hits a little too close to home for the garment industry that supports the highly fashionable — and profitable — designer brands on show in Milan.

The New York Times published a damning expose last Thursday of the Italian cottage industry underpinning some of the most well-known luxury brands such as Tod's, Gucci, Prada, MaxMara and Louis Vuitton. Women contracted out from garment factories and paid just €1 for each meter of fabric completed, for example, form the backbone of the "Made in Italy" high-quality craftsmanship branding that nets boutiques €2,000 per coat.

"I know I am not paid what I deserve, but salaries are very low here in Puglia, and ultimately I love what I do," a seamstress told NYT, from the attic workshop in her apartment. "I have done it all my life and couldn't do anything else."

"We all accept that this is how it is," she said.

The paper noted that according to a report from the University of Bocconi and Altagamma, an Italian luxury trade organization, with half a million people employed in Italy's luxury goods sector last year, the industry makes up 5 percent of the country's gross domestic product and has been the lynchpin of Italy's economic recovery.

Is the Future of the World Dystopian?