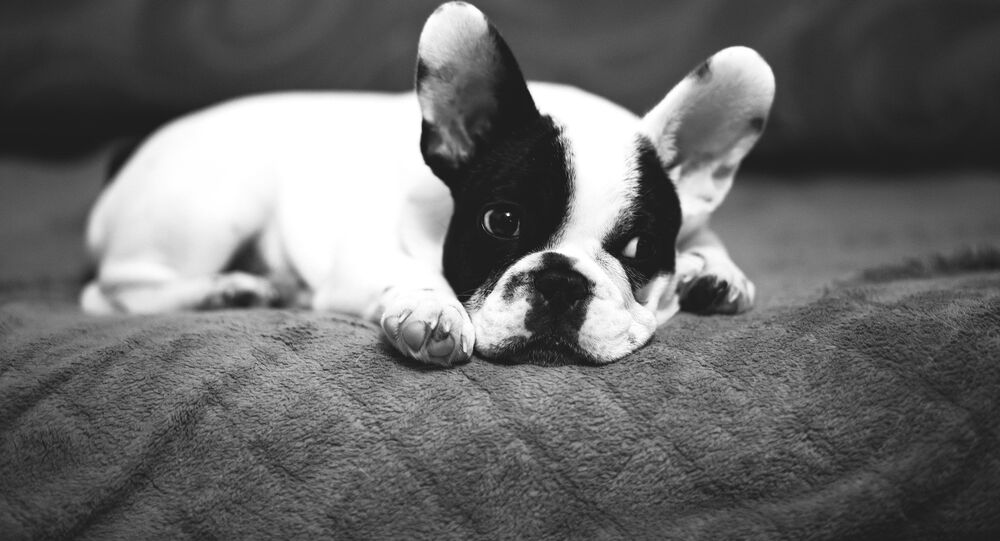 Pet Cemetery? Dozens of US Dogs Have Died Mysteriously After PetSmart Grooming

A nine-month investigation by NJ Advance Media revealed on Thursday that nearly 50 dogs so far have died immediately following grooming sessions at PetSmart stores across the United States, sparking concerns over groomer training and sales quotas pushed by officials.

For Nick Pomilio, the time he had with his English bulldog, Capone, came to an abrupt end on February 1, 2017. After what was supposed to be a 15-minute nail trimming appointment, which lasted nearly an hour, the seven-year-old dog was rolled out in a shopping cart by employees because he wasn't able to walk.

Less than five minutes into the drive home, Pomilio discovered that Capone had stopped breathing. By the time he got back to the store, it was too late.

© Blogger photo / puppy.addiction
I Got Your Back: Dog Helps His Pal Talk to Girlfriend Over Fence

"I'll never forget that last look he gave me," Pomilio told the media group. "You don't take the dog to get its nails clipped and it winds up dead as a doornail."

Since 2008, the report found that 47 dogs across 14 states died after they were dropped off at local PetSmart locations. The state with the highest reported dog deaths at the retail chain was Pennsylvania. Of the 47 deaths, 32 of them came after 2015, when the company was bought out by by private equity firm BC Partners for $8.7 billion.

The investigation revealed that once new management set up shop, things changed, and the pressure to get more dogs in was increased.

"When the new owners bought it, they demanded six to eight dogs in eight hours," Marti Fernandez, a former salon manager who worked at two New Jersey PetSmart stores, told the publication. "This is in addition to walk-in clients. The phones are ringing off the hook, you're meeting with pet parents, doing paperwork…. There's always pressure to do more dogs.

Fernandez ultimately parted ways with the company in 2016 after growing tired of the goals demanded of her. "I can handle pressure; I can't handle their pressure," she said.

Fernandez's sentiments were echoed by former employee Janette Parker, who stressed that PetSmart's so-called love for pets is a lie. "They say their business is all about the love of pets. Be honest. They work for the love of money," she said. After quitting in 2017, Parker opened up her own dog grooming salon.

Other findings noted in the investigation revealed that English Bulldogs and other breeds known as brachycephalic dogs accounted for 20 of the 47 reported deaths. Dogs identified as "brachycephalic" are those with a short nose and a flat face, such as pugs, chow chows and bullmastiffs. According to website Petcarerx, these pooches tend to have trouble breathing due to their snouts.

The matter of groomer training was also raised. According to PetSmart, trainees go through several sessions, which include spending three months bathing 125 dogs to learn basic techniques, and attend a grooming academy for four weeks. Afterward the graduates are sent back to their home stores for additional supervised training that lasts nearly 10 months.

And while the process sounds thorough, it's not, according to Katelyn Douglas, who worked in a North Carolina store.

"On the first day at academy, there was a dog for me," Douglas said. "They gave me clippers and shears and kind of just said, ‘Go for it.' I was like, ‘Oh, I've never held these before.'… They said, ‘Well, just don't hurt the dogs.'"

When she returned to her home store, she encountered the same attitude from her salon manager, who was supposed to supervise all her grooming sessions. "She wouldn't even see the dogs I was doing sometimes," Douglas said. "What if I'm doing something really, really wrong, but no one's checking?"

The news outlet also found that on various occasions, PetSmart offered payouts that amounted to a couple hundred dollars to owners whose pets died in exchange for owners signing a non-disclosure agreement (NDA) that requires them to delete any negative social media posts regarding the company.

North Carolina resident Michael Batchelor told reporters that PetSmart offered him $140 to cover his vet bills after his Olde English Bulldogge, Gunner, left a grooming session in January with bloodied eyes due to hemorrhaging. The bills would be covered as long as Batchelor agreed to sign an NDA and delete his a Facebook post he'd made regarding Gunner's injury.

© CC0 / Pixabay
A Man's Best Friend: Dogs Being Trained to Sniff Out Cancer in UK Patients

After PetSmart made it clear they weren't going to take responsibility for hurting his dog, Batchelor declined their offer. He has since launched a Facebook page titled, "Justice for Gunner and Other Fur Babies," which has a membership of 12,000 users.

When investigators reached out to Jim Dougherty, the co-founder of PetSmart, he indicated that he was pleased with how the company was being run since the BC Partners takeover, though he was concerned about recent news reports on dog deaths.

Without naming PetSmart outright, Dougherty said that reports of bad grooming experiences were heartbreaking. "It does break my heart… I do think sometimes, unconsciously, profits are put [above] everything else. Not too sure that isn't the nature of our way of life and business. But that doesn't mean it has to be that way," he said.

With PetSmart steering clear of admitting any wrongdoing, it's presently unclear how many dogs had died after PetSmart groomings since the retailer has refused to the disclose such information. In many cases, it also unclear just how the dogs died as necropsies on animals are often inconclusive, according to the report.

In response to the media group's investigative report, PetSmart issued a lengthy statement, outlining how they've established the "highest safety standards in the industry" and how the report's claim of a "systemic problem is false and fabricated." The statement continues by picking apart assertions made in the report, stressing that many of the deceased dogs had pre-existing medical conditions.

Pooch Patrol to the Rescue: Dogs Save Children From Tiger Attack in India