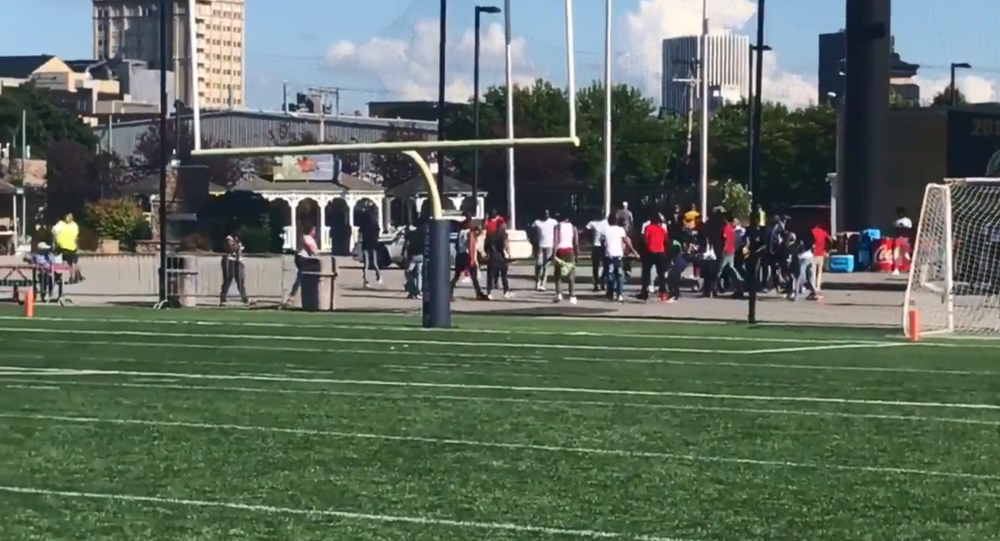 Officials in Rochester, New York, announced on Monday that new security measures would be put in place after a brawl broke out at a high school football game on Saturday among spectators in the stands.

Following a meeting with several school and city officials, including Rochester Mayor Lovely Warren, Rochester City School District Superintendent Barbara Deane-Williams and interim Rochester Police Chief Mark Simmons, it was agreed that a security plan for all future sporting or entertainment events must be approved by the Rochester Police Department beforehand.

"In the stands are community members, alums, our own personal children. They all want to have a great experience," Shaun Nelms, the superintendent for East High School who took part in the Monday meeting, told local station Spectrum News. "You have students who come to the event with the intent to cause harm and confusion. It is frustrating and disheartening."

Footage of the brawl, which broke out during a football game between Rochester's East High School and Joseph C. Wilson Magnet High School this weekend, shows several spectators in a heated argument within the stands. It later escalates even further once opponents begin throwing blows in the parking lot, where it's somewhat squashed by security officials at the Marina Auto Stadium.

​"I feel like at the beginning of the game everything was going good, and then out of the blue it took an unexpected turn," Deljon Johnson, a senior football player for East High, told news station WHAM. "Because of this incident, the game was stopped."

"For it to have to end, not because of us but the people watching, that was disappointing," Johnson added.

Though the highly anticipated game, which featured several college recruits, was stopped at halftime, school administrators informed Spectrum News that the game would be picked back up this week ahead of East High's homecoming game scheduled on Saturday.

According local station WHEC, once the game was called at the half and student-athletes were back on their respective buses, police moved in to clear out the stadium. During this time, several more fights broke out among eventgoers, which initially led to only one arrest. Two additional arrests were made late Sunday. All arrestees were charged with disorderly conduct; none were students at either school.

Lorenzo Williams, who was sitting close to where the fracas took place, told WHEC that it was complete madness in the stands. "Total chaos, man. It was just total chaos. I'm sitting here, and I hear everybody running. I look around to the side, and they're punching and thumping and kicking, and everybody's running to the area," he said.

An investigation by the Rochester police into the incident is ongoing.