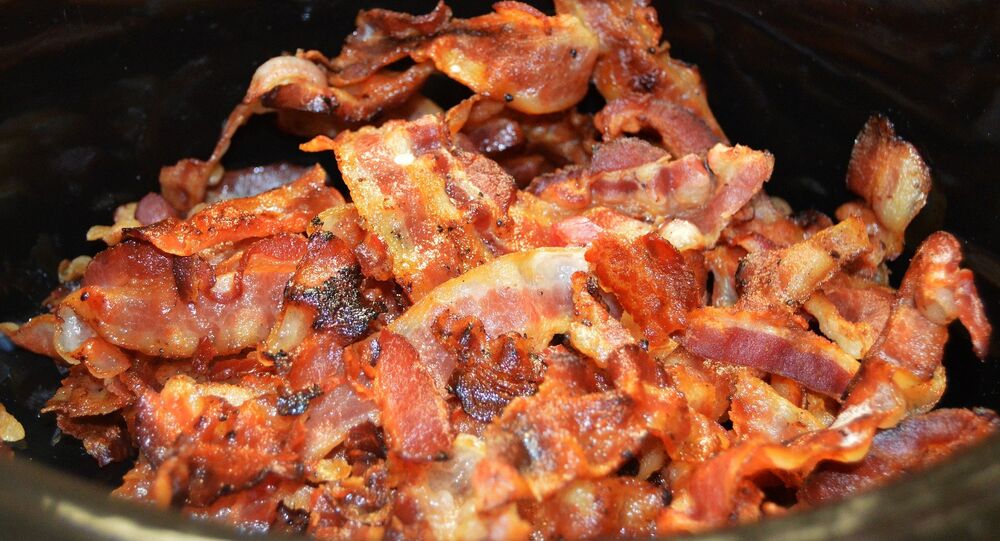 Hold off on the bacon! A new Johns Hopkins study reveals thats beef jerky, salami, hot dogs and other cured meats may be linked to mania, a psychiatric state characterized by an elevated and hyperactive mood.

Manic episodes are usually associated with bipolar and schizoaffective disorder. According to the Diagnostic and Statistical Manual of Mental Disorders (DSM) issued by the American Psychiatric Association, mania, which may last for weeks or even months, often results in a reduced need for sleep, increased rates of speech, flights of ideas, high self-esteem and an increased interest in risky or dangerous activities.

© CC0
Psychology Professor: 'It’s Really Not Clear Why the WHO Picked Video Games Addiction as a Disorder'

"We looked at a number of different dietary exposures, and cured meat really stood out," lead author Robert Yolken, a professor of neurovirology in pediatrics with the university, said in a press release. "It wasn't just that people with mania have an abnormal diet."

In the study, which was published July 18 in the journal Molecular Psychiatry, researchers collected 10 years of demographic, health and dietary data on 1,101 adults between the ages of 18 and 65. Some of the adults in the study had psychiatric disorders; others did not.

The researchers found that people who were hospitalized for a manic episode had a history of eating nitrate-cured meats at a rate about 3.5 times higher than people who did not have a history of psychiatric disorders

"Future work on this association could lead to dietary interventions to help reduce the risk of manic episodes in those who have bipolar disorder or who are otherwise vulnerable to mania," Yolken said in the press release.

The researchers experimented on rats to test whether there was a link between eating cured meats and manic episodes. They divided the rats into two groups, with one group eating a regular rat chow diet and the other eating the regular diet and a snack-size portion of a hot dog or beef jerky every other day.

"We tried to make sure the amount of nitrate used in the experiment was in the range of what people might reasonably be eating," Yolken said.

Researchers found that the rats eating the cured meat diet exhibited hyperactivity and insomnia within two weeks. In addition, they had different gut bacteria in their intestines.

"There's growing evidence that germs in the intestines can influence the brain," adds Yolken. "And this work on nitrates opens the door for future studies on how that may be happening."

According to the authors, the findings do not provide a clear link between eating cured meats and having manic episodes, but they do indicate that cured meats may be one factor that contributes to mania and bipolar disorder.

"It's clear that mania is a complex neuropsychiatric state, and that both genetic vulnerabilities and environmental factors are likely involved in the emergence and severity of bipolar disorder and associated manic episodes," Johns Hopkins medical and doctoral student Seva Khambadkone, who was also involved in the study, said in the press release.

"Our results suggest that nitrated cured meat could be one environmental player in mediating mania."

Bottoms Up! British Woman Among Heaviest Drinkers in the World - Study