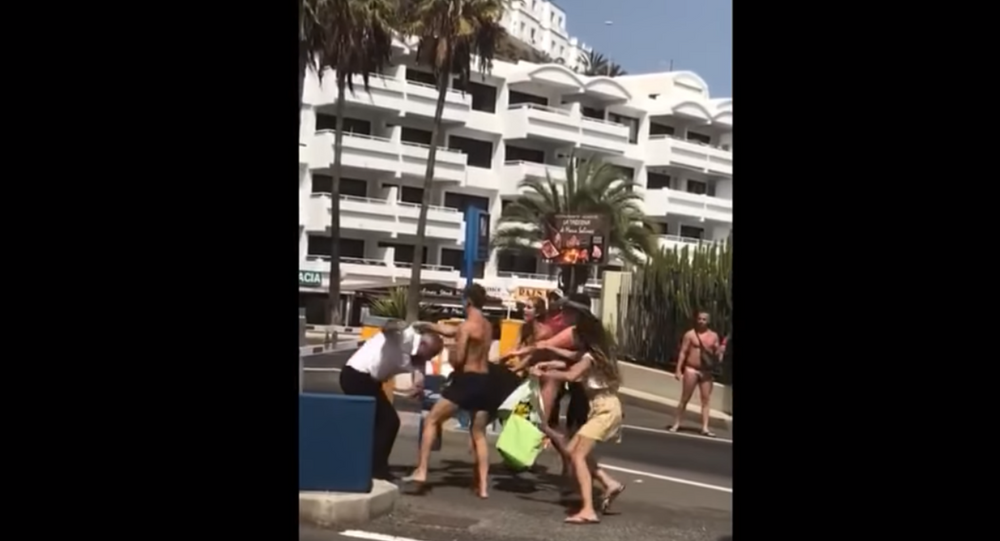 Footage of a violent brawl in Spain’s resort town of Puerto Rico de Gran Canaria surfaced this week, showing the moment that a bus driver and a tourist exchanged blows over traffic delays.

According to the Daily Mail, the Sunday brawl was caused by two vacation-goers who decided to block the entrance to a car park because they lacked the funds to pay for their stay. The fight began after the frustrated bus driver took matters into his own hands and confronted the pair.

Footage recorded by a bystander shows one of the tourists yelling back at the driver and punching the large vehicle. Roughly 10 seconds after the bus is struck, the driver abruptly exits and makes his way toward the tourist. After the bus driver pushes the tourist, fists fly.

​With a bystander deciding to restrain one of the rowdy tourists, the driver tosses the other tank top-wearing man to the ground and goes to town before a gaggle of concerned vacationers intervene to quash the altercation.

Screenshot/Kulla Kris
‘I Will Take My Wig Off Right Now': Commuters Brawl on UK Train Over Thrown Sandwich (VIDEO)

Although the men quickly retaliate against the driver, occasionally kicking him, several of the bystanders are also seen urging the driver to stop his advances. Two women who appear to be companions of the male tourists later come onto the scene in the hopes of getting the pair to stop fighting. Their efforts were mostly in vain, as the men continued on with their own agenda.

Though the initial fight does come to an end, with all three men walking away and returning to their vehicles, a second round begins after one of the tourists who began the fight suddenly sneaks by the bus driver's window in an attempt to punch him. As the bus driver comes charging out of his vehicle, the two women quickly work to wrangle the two men once again.

Throughout the altercation, bystanders are repeatedly heard shouting for the police to be called, though it's unclear if authorities were contacted. The recording ends as both parties yet again make their ways back to their respective vehicles.