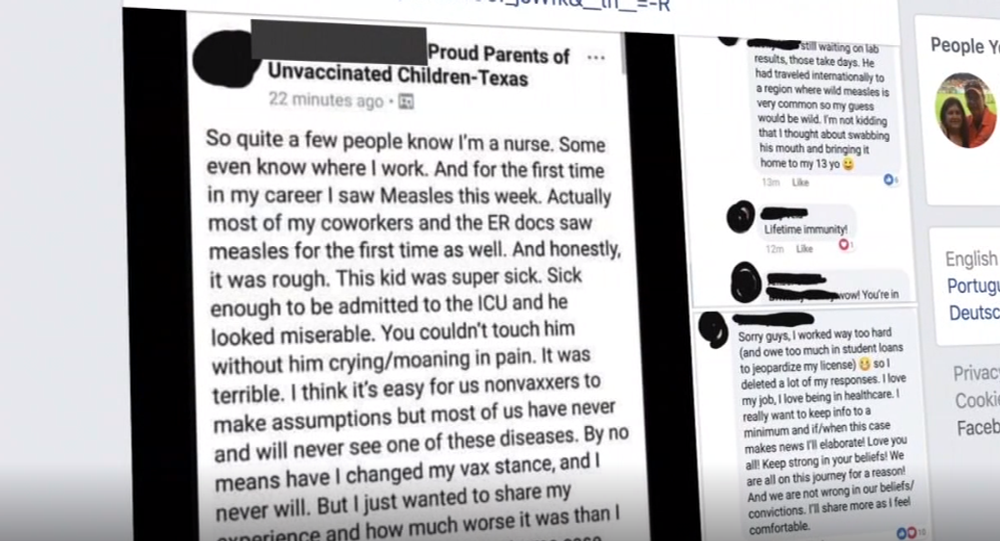 A nurse at the Texas Children's Hospital West Campus in Houston, Texas, was fired after posting about a child who had tested positive for measles on an anti-vaccine Facebook page this weekend.

According to a Tuesday report by ABC7, the unidentified nurse posted about the child's illness on a Facebook page titled "Proud Parents of Unvaccinated Children — Texas." The page has since been deleted from the social media site.

In screenshots taken by Eyewitness News, the nurse reportedly wrote, "… for the first time in my career I saw Measles this week. Actually most of my coworkers and the ER docs saw measles for the first time as well. And honestly, it was rough. The kid was super sick. Sick enough to be admitted to the ICU and he looked miserable… By no means have I changed my vax stance, and I never will. But I just wanted to share my experience and how much worse it was than I expected."

At one point, the nurse allegedly commented on the post, "I'm not kidding that I thought about swabbing his mouth and bringing it home to my 13 [year old]."

According to ABC7, after the screenshots were shared by an unidentified parent on the Texas Children's Hospital Facebook page, the hospital released a statement stating that it was conducting an investigation.

"We were made aware that one of our nurses posted protected health information regarding a patient on social media. We take these matters very seriously, as the privacy and well-being of our patients is always a top priority. After an internal investigation, this individual is no longer with the organization," the hospital said in a Monday statement obtained by Eyewitness News.

Dr. David Persse, the director of the City of Houston Health Department, told ABC7 that child the nurse referenced is still in the hospital. The child is still too young to get the measles vaccination, but the rest of his or her family is immunized.

"My understanding is the child is sick with a capital S. Keep your prayers for them; they are in the best place they could be, but yes, this is a real situation for this family," Persse said.

The nurse had no comment after Eyewitness News reached out to her following the incident.

According to the US Centers for Disease Control and Prevention (CDC), measles is an acute viral respiratory illness that is characterized by high fever, malaise, cough and a rash which usually appears 14 days after a person is exposed. The virus is transmitted through airborne, infected particles.

Measles can be prevented with a combination measles-mumps-rubella (MMR) vaccine.