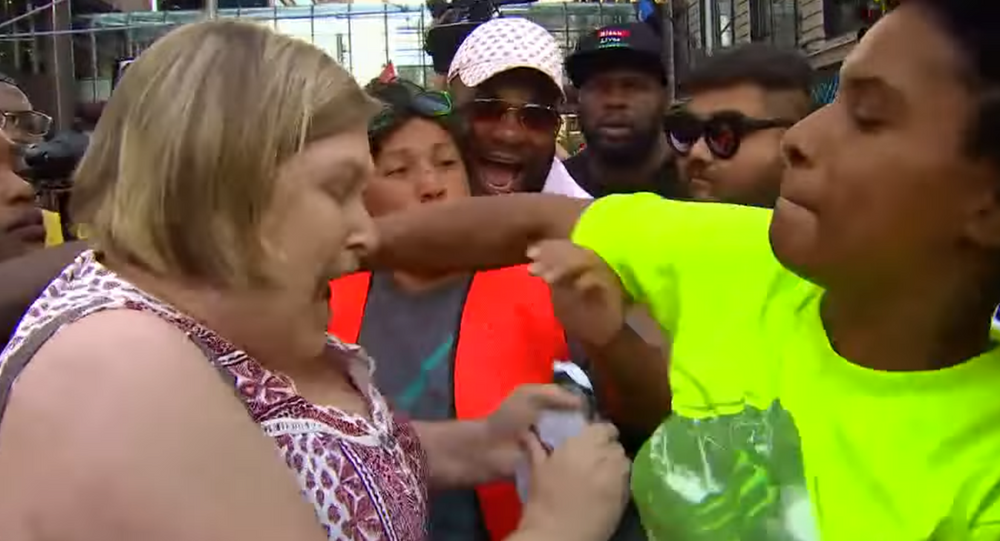 A Minnesota woman was seeing stars Tuesday afternoon after she was punched for ripping up a demonstrator's sign during a rally protesting the fatal shooting of Thurman Blevins by officers from the Minneapolis Police Department.

Video of the punch surfaced this week on social media, showing the woman walking into a crowd of demonstrators and tearing apart a sign one of them is holding, which read "Justice For June." The owner of the sign quickly reacts by slapping and punching the woman away.

The woman is later pulled away from the crowd by police and is heard telling an officer on the scene that she "just wanted to go home."

​According to reports, the woman was having a panic attack when she confronted the group in an attempt to push through the crowd to get home. Per the Minneapolis police, no formal complaints or arrests have been made, local Minneapolis station KMSP reported.

The incident took place as hundreds of demonstrators marched through downtown Minneapolis after speaking events wrapped up outside of the Hennepin County Government Center. Protesters ended up walking along the city's light rail track, preventing trains from proceeding on their routes.

The protest was in response to Hennepin County Attorney Mike Freeman's announcement this week that officers Ryan Kelly and Justin Schmidt, who fatally shot Blevins four times on June 23, would not be charged. Per the attorney, the officers were following protocol, as Blevins was armed and fleeing from the scene.

"When Mr. Blevins fled from the officers with a loaded handgun, refused to follow their commands for him to stop and show his hands and then took the gun out of his pocket and turned toward the officers, Mr. Blevins represented a danger to the lives of Officer Schmidt and Officer Kelly, " Freeman said in a statement. "Their decision to use deadly force against Mr. Blevins under those circumstances was authorized by Minn. Stat. § 609.066, and as such there is no basis to issue criminal charges against either officer."

Bodycam footage released by the department shows Blevins running away from Kelly and Schmidt and leading them on a foot chase for roughly two blocks before the officers discharge their weapons.

US Homeland Security Department Concerned About Blast at Minnesota Mosque

Minnesota Cop Who Killed Australian Woman Had Three Complaints Against Him