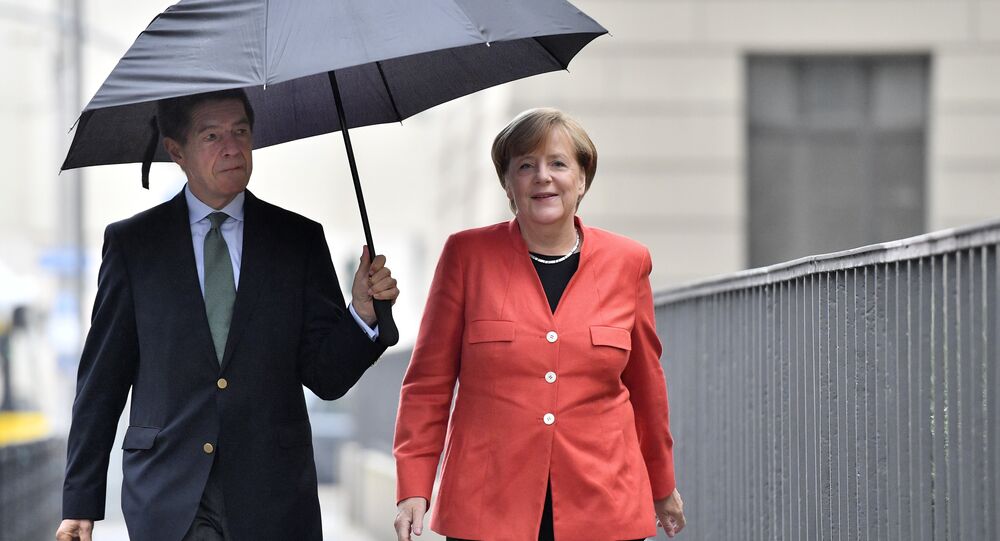 Having had a lot on her plate, from migration discord within her own government to the tariff row with the US, Angela Merkel has taken some vacation time. But unlike the recent years, she has completely gone off the radar this time, as her husband has been spotted alone in their traditional holiday destination in the mountains.

Angela Merkel hasn’t been seen in public for a week, according to the German media, since she attended Richard Wagner’s Lohengrin in Bayreuth with her husband before the Chancellor’s vacation began.

In breach of the 10-year-old tradition of hiking in the South Tyrolean Alps, which have provided social media users with laughs from time to time with snaps of Angela Merkel in a raincoat; she hasn’t shown up there with her husband this year. According to the German tabloid Bild, the Chancellor’s husband Joachim Sauer is now with his son from his first marriage instead of his high ranking wife.

Angela Merkel’s absence has prompted speculations over the reasons behind it, from the marriage crisis between the Chancellor and her husband or hospital leave to some secret mission or simply too much work to have a break.

However, the Chancellor earlier confirmed herself that she was going to have some days off before the suspected holiday, as she had said during the summer press conference "I do not want to conceal that I am happy if I have a few days off now and can sleep a little longer."

After the week of speculations, the Bavarian outlet Merkur.de has shed some light on Merkel’s movements as it reported that the first class tourist spent Tuesday evening in Munich, where she attended a performance of Wagner’s Parsifal in the State Opera.

According to the outlet, Merkel, accompanied by her husband, sat in balcony seats, accessible to "ordinary citizens," rather than in a closed box. The media has also quoted readers, saying some had spotted Merkel in a Munich hotel.

It remains unclear yet why Angela Merkel is skipping the traditional hiking holiday, or whether she is going there later, and if that’s not the case, where she is heading then. Whatever her vacation choice was, the government spokeswoman cited by the Bild newspaper said “The Chancellor is always available, fully capable of working and informed at any time about current developments."

Merkel: EU Ready to Discuss Tariffs With US, May Take Retaliatory Measures