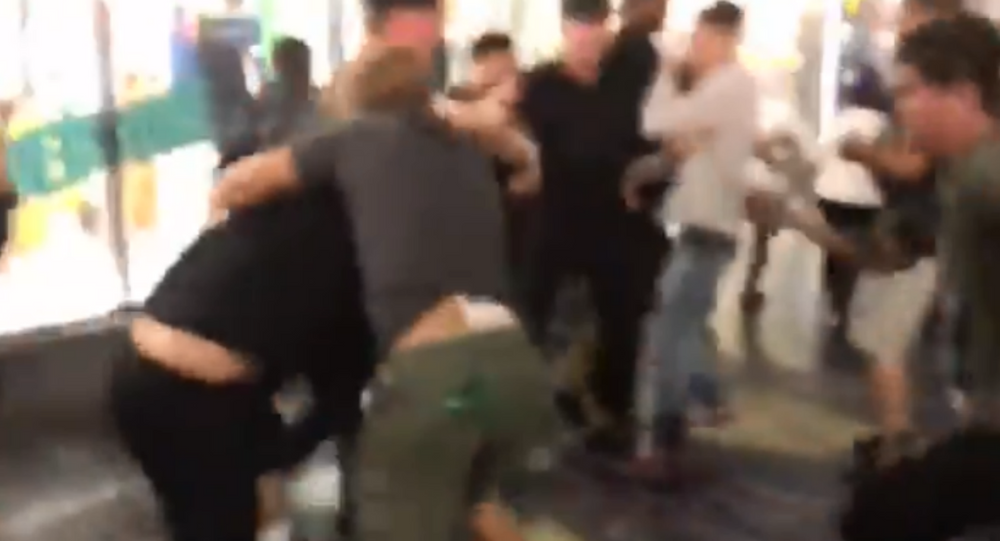 A massive fight broke out along California's Hollywood Walk of Fame late Thursday after a group of supporters of US President Donald Trump decided to erect a cardboard cut-out to replace the commander-in-chief's recently pickaxed star.

As the story goes, the MAGA crew, which included the likes of singer Joy Villa, a recording artist who recently appeared at the 60th annual Grammy Awards with an anti-abortion-themed dress, arrived at Trump's Hollywood star to "spread love" and sing a round or two of the US national anthem. They also granted bystanders the chance to take photos with a cardboard version of 45.

​However, 20 to 30 minutes into the gathering, things take a bit of a turn after one man joins in, taking his shirt off and encouraging a growing crowd to chant, "F**k Donald Trump." Things get even more intense after the MAGA crew's security, allegedly a former US Marine, arrives on the scene following an argument over who can and cannot use the word "n***a."

The actual exchange of fisticuffs was captured by another person's camera.

Officers from the Los Angeles Police Department did eventually arrive on the scene, however, no arrests were made, as everyone was already gone. Villa did say in a tweet that her group had filed a police report.

Trump's star was damaged earlier this week on Wednesday by 24-year-old Austin Clay, who told tabloid TMZ that the Trump administration's decision to separate families entering from the US-Mexico border motivated him to commit the act.

​"I just felt really passionate because of what happened with the immigrants and stripping children away from their parents," Clay told TMZ, explaining he thought the Walk of Fame should honor true visionaries. "It kind of lit something off inside me…. Donald Trump represents everything that everybody with half a brain and half a heart in this country resents. So that's why I did it."

Clay was later booked on suspicion of felony vandalism. His $20,000 bail was posted by James Otis, a man who previously smashed up the Trump star in 2016, according to TMZ.