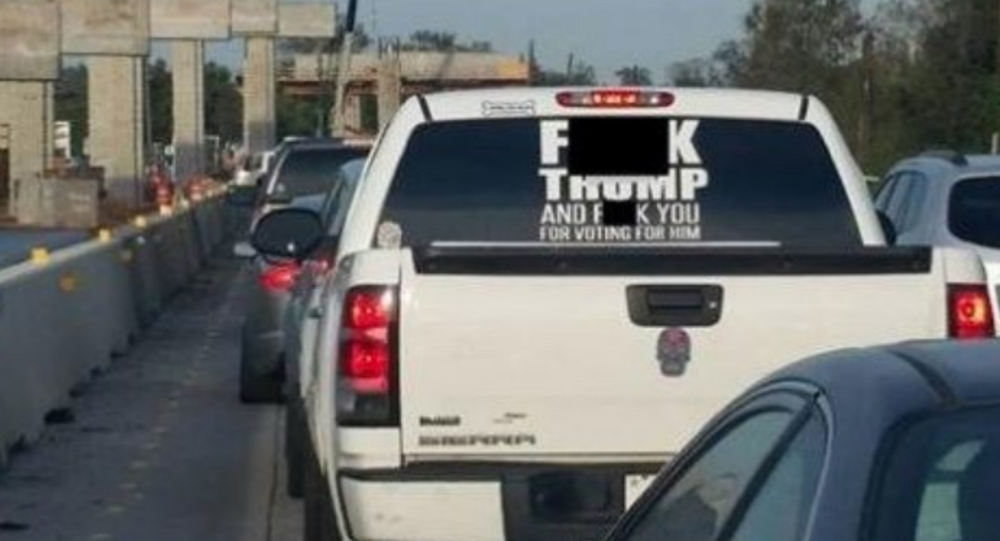 Texas resident Miguel Fonseca, the owner of a white truck adorned with a "F**k Trump" sticker, was arrested Sunday after officers with the Sugar Land Police Department pulled him over for not having a front license plate.

Though officers initially stopped Fonseca for the license plate failure, they slapped on the handcuffs after discovering he had two outstanding warrants, one for speeding and another for failure to appear in court, The Washington Times reported.

According to Doug Adolph, the spokesperson for the department, Fonseca was also hit with a resisting arrest charge after officers had to forcibly remove him from the truck.

After the weekend incident, Fonseca's wife, Karen, launched a GoFundMe campaign to raise $1,000 for her husband's bond. Currently the donations stand at a mere $108.

Despite the department's explanation for the incident, Karen stated in the donation page's bio that her husband was arrested because the truck's window tint was too dark.

"My husband was JUST ARRESTED because of our window tint being 2 shades too dark," Karen wrote. "He was followed by 3 white police officers that were in our neighborhood due to an unrelated dispute. The police saw our truck, followed my husband some ways, and pulled him over about 7 miles from the house."

"They gave him resisting arrest because he was on the phone with me telling me to get the truck. He told the officers he is okay with me getting the truck. They said he was resisting, he said ‘No, I'm just telling her where to come get the truck since she needs it for the kids,'" she added.

Adolph told Sputnik that Fonseca's remarks were "not correct," explaining that officers did find that the window tint was illegal, but did not issue Miguel a citation for it.

In a separate blog post, Karen stressed that she has "no transportation for the kids, my husband is in jail and I am facing unnecessary fees."

Despite Miguel's call to Karen giving her permission to pick up the truck, the vehicle was ultimately towed as her husband had already been taken away by officers by the time she'd arrived at the scene.

Speaking to Houston news station KHOU 11 on Monday, the upset wife suggested that officers refused to let her drive the car because they were bothered by the ‘F**k Trump' decal on the truck's back window.

"It's all fishy the way it took place," she told the outlet. Fonseca told the station that she also has plans to add new stickers to insult the Sugar Land Police Department on the side windows.

"I've got a big mouth and won't shut up," she said. "I want people to know that they can't get away with what they do."

The Fonseca family made headline news last November when Fort Bend County Sheriff Troy Nehls threatened to arrest the truck's owner over the sticker. Rather than taking it down, Karen created a new sticker, replacing "F**k Trump" with "F**k Troy Nehls."

Miguel Fonseca was released from police custody on Tuesday after a judge credited him with time served and arranged a payment plan for fines related to his outstanding warrant, Adolph said. The truck owner is expected to return to court in the coming months.

Texas Student, Mother Detained for Waving to Each Other During Graduation