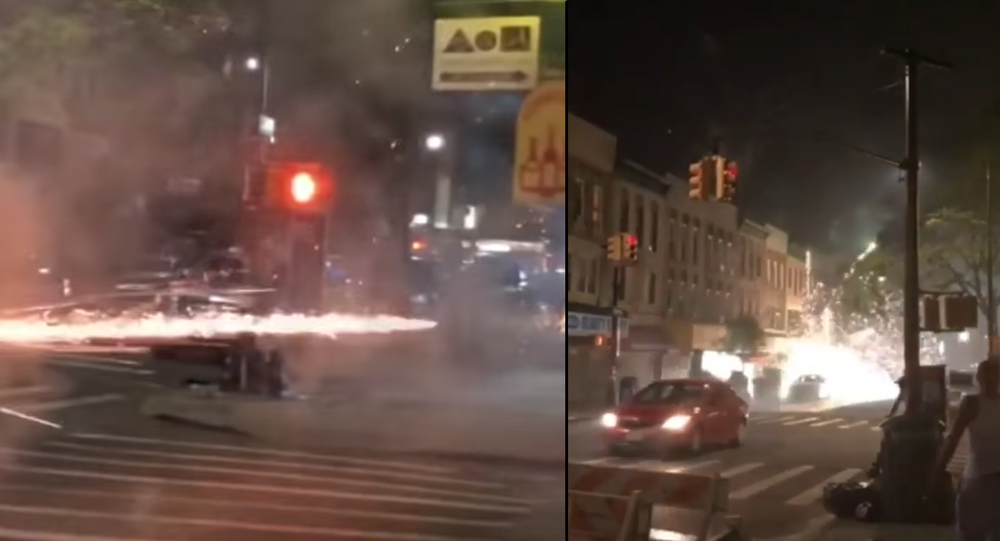 Laughter, fear and confusion were all ignited for Crown Heights New Yorkers on this US Independence Day!

Brooklyn pedestrians were forced to scatter, flee and hit the floor this Fourth of July after one unidentified woman decided against pointing her Roman candles into the sky and elected instead to fire them down the streets of the borough's Crown Heights.

In an unorthodox expression of celebration, the woman, dressed in a tank top, visor and breezy tennis skirt, is seen calmly pointing the candles at buildings, individuals and even cars passing by around 11 p.m. Wednesday.

Though letting off the shells in every direction, the now-suspect does ironically make a point of utilizing the crosswalks throughout her launching spree as three additional women follow closely behind.

"It's the same girl!" yells one man in the second video clip as others scream and even laugh in the background.

Like many areas in the US, fireworks — including sparklers — are illegal both to sell and to use in New York City.

As we warned you, fireworks are illegal and dangerous if not handled properly. Excellent work by officers from the @NYPD111Pct who confiscated these illegal fireworks last night. We encourage you to leave fireworks for the professionals. pic.twitter.com/hKL3xlv3jN

But that doesn't stop a lot of folks in the Land of the Free (to set things on fire). "I've lived here about 10 years and it's pretty consistent year-to-year," one longtime resident, referencing firework use, told CBS New York.

While police have not identified any injuries related to the Roman candle celebration, they are reportedly searching for the woman who carried out the act, according to local reports.