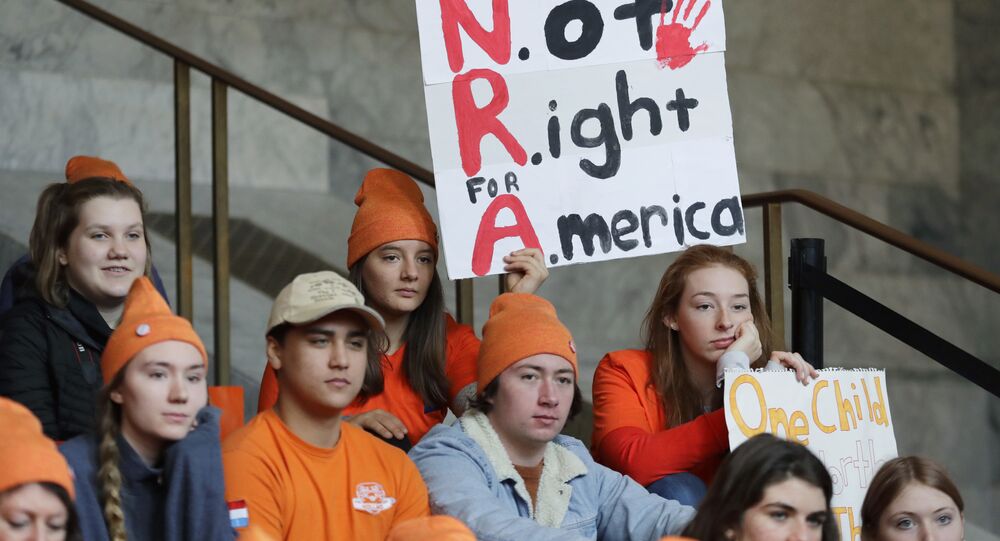 A spokeswoman for the National Rifle Association publicly called for news journalists and reporters who detail widespread support for common-sense US gun regulation to be physically assaulted and “curb-stomped.”

© AFP 2021 / SAUL LOEB
Criminology Professor on White House Reaction to Mass Shootings: Nothing Practical Is Ever Done
In the wake of another mass shooting tragedy in the US last week that saw five employees at a local newspaper shot and killed by what many are calling a ‘targeted attack' by a domestic terrorist, National Rifle Association (NRA) spokeswoman Dana Loesch has been revealed to be encouraging violence against those who work in the media.

In an official NRA video release from 2016, spokeswoman Loesch called for illegally using openly violent tactics — including physical abuse — against members of the press who do not agree with the agenda of the US weapons-lobbying organization.

Calling for journalists to be "curb-stomped" — an act of violence commonly associated with US neo-Nazi clubs — Loesch stated in her NRATV video clip that media employees who do not agree with NRA policies are "the rat bastards of the earth," cited by the Independent.

To an audio background of dark and ominous music, Loesch — dressed in black — intones: "your time is running out. The clock starts now," before turning over a small sand-filled hourglass, a startlingly open threat against journalists, according to media watchers in the US.

In the wake of the newspaper shooting in Maryland last week, civil rights activist and writer Shaun King — reflecting widely-held sentiment in the US — commented that official NRA spokesperson Loesch was actively calling for journalists to be beaten and killed.

King observed that Loesch "denies it, but the record is clear."

Loesch, associated with the far-right Breitbart website, had denied making the remarks, accusing King of fabricating his information, until the activist provided the evidence.

Fedex, REI, Symantec, Best Western Hotels, Wyndham Hotels, Delta Air Lines, United Airlines, MetLife, First National Bank, Enterprise Rent a Car, Hertz, Budget Car Rental, as well as moving companies Allied Van Lines and North American Moving Services, are just a few of the many companies that have cut ties to the NRA as a result of an ongoing epidemic of mass shootings in the US and the lobbying group's heatedly fear-fueled rhetoric.