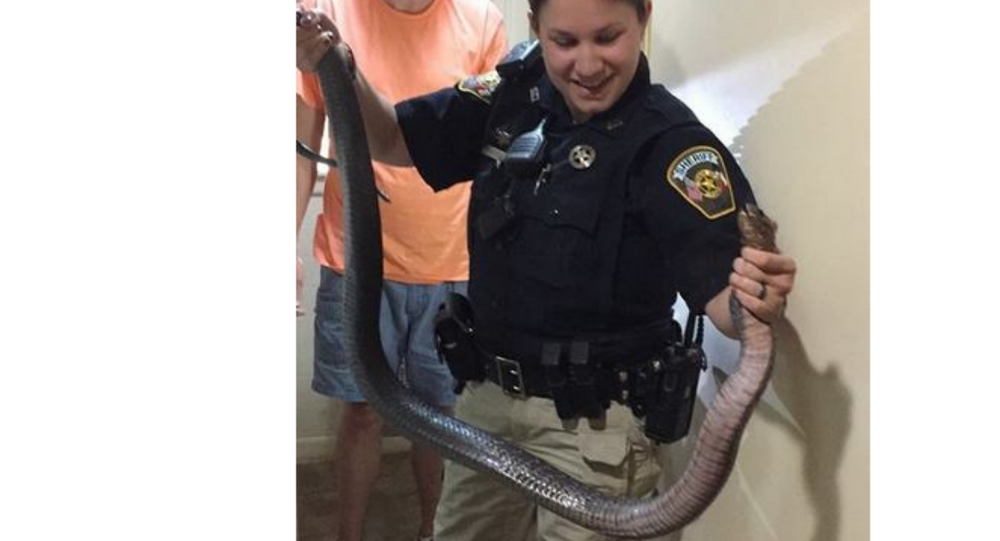 Wade Vielock of Bee County, Texas, was cleaning his bathroom recently when he was met with a slithery surprise in the form of a huge snake crawling out of his toilet.

To make matters worse, Vielock didn't notice the snake until his six-year-old son pointed out the five-to-six-foot- indigo snake slithering from the home's plumbing. At that point, the father of the year ran out of the bathroom so fast, he almost knocked the boy over.

"The snake was not harmed and was released back into the bush," the Bee County Sheriff's Office wrote in a Facebook Post on June 9.The deputy eventually managed to wrangle the snake out of the vanity as Vielock held a flashlight over her head.He called the Bee County Sheriff's Office. When Sheriff's Deputy Lindsay Scotten finally arrived at the scene, the snake had climbed out of the toilet and was inside the bathroom vanity.

The snake turned out to be a harmless but enormous blue indigo snake. Though this species, the largest in North America, is not venomous, it does sometimes bite. It is also considered a threatened and protected species by the US Fish and Wildlife Service. "I looked back at the toilet and that snake was about three feet out, climbing towards the window," Vielock todl KSAT. "It took at least six years off my life."

"I couldn't ever do it!" one user commented.

"Definitely a better and braver woman than I will ever be," another user wrote.

"I would be that guy just watching too," one Facebook user wrote.

According to the Sheriff's Office, there has been an increase in snake calls this year due to the rainy weather. The rain forces snakes, whose natural habitat is near bodies of water, toward peoples' homes.

"Residents are encouraged to be aware of their surroundings. Blue Indigos are non-venomous and will eat venomous snakes. If you encounter a snake in our around you residence, you can contact the Sheriff's Office for assistance," the office added.