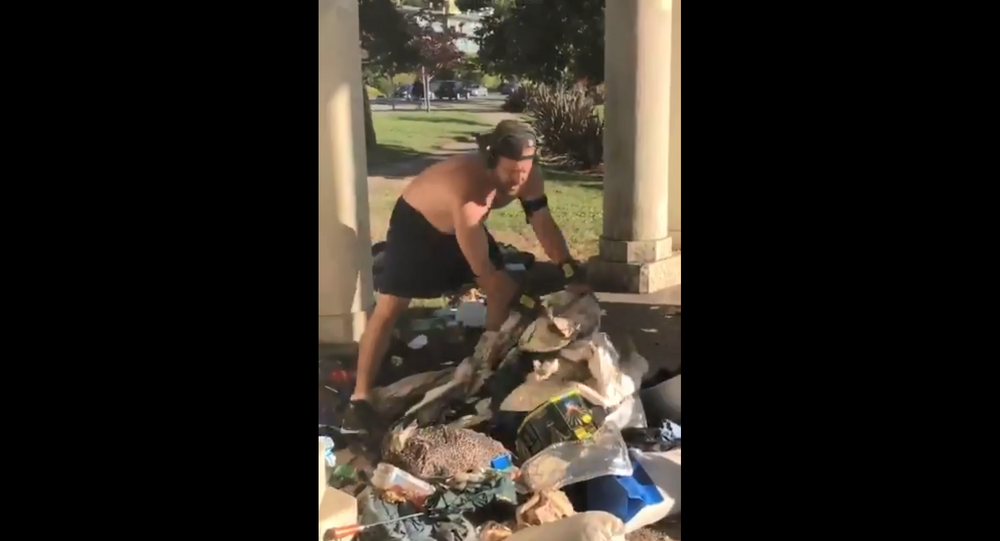 A video captured Friday shows a jogger in Oakland, California, throwing personal items from a homeless person’s encampment into Lake Merritt as onlookers plead with him to stop.

The video, which was shared Saturday on Twitter by Oakland resident JJ Harris, shows the shirtless jogger tossing the homeless man's belongings in the lake and in a nearby trash bin.

​"Hey man, that sh*t ain't cool," one of the bystanders is heard saying in the video. "Somebody did that sh*t to people last night somewhere else… you gotta stop f*cking doing that s*it. What the f*ck is the matter with you?"

"That guy's been living here for years," another bystander said.

"I'm picking up trash, what do you want me to do?" the jogger tells onlookers. "If you want to help, help," he adds.

The owner of the belongings doesn't appear to have been there at the time of the incident.

"You just threw it [an item belonging to the homeless person] in the lake," another bystander says.

The jogger tries to play it off as an accident, but the person responds, "No, it wasn't, I saw you drag and throw it in."

"I was definitely distraught. I was sad about the whole situation and angry," Harris told Raw Story following the incident, explaining that the homeless person was well known by locals and had been living in that spot for a while.

"He [the jogger] ignored everyone and then put his headphones back on and ran off to the north part of the park," local Kristin Gallup told the SFGate following the incident.

"I think it's morally reprehensible and straight up cruel what this guy is doing. This whole incident is a pretty succinct manifestation of so many of Oakland's current issues — racism, gentrification, white privilege, male privilege, hatred towards poor and homeless people, lack of resources due to funds not being allocated properly, lack of consequences for unjustifiably bullying homeless people and sheer apathy towards their predicaments," she added.

Oakland, like many other cities in the US, has been facing an affordable housing crisis. In January, UN Special Rapporteur Leilani Farha stated that the homelessness rate in Oakland increased by 15 percent between 2015 and 2017.

"I find there to be a real cruelty in how people are being dealt with here," Farha said in a January interview with the East Bay Express.

"Every [homeless] person I spoke to today has told me, ‘We are human beings.' But if you need to assert to a UN representative that you are a human, well, something is seriously wrong," she added.

The identity of the man who demolished the homeless man's encampment has not yet been confirmed.

In a Sunday radio interview with KCBS, Oakland Mayor Libby Schaaf encouraged people to donate to groups committed to helping the homeless.

"I recognize everyone is so frustrated with a lot of our urban challenges and homelessness is number one, but please, show compassion," she said.