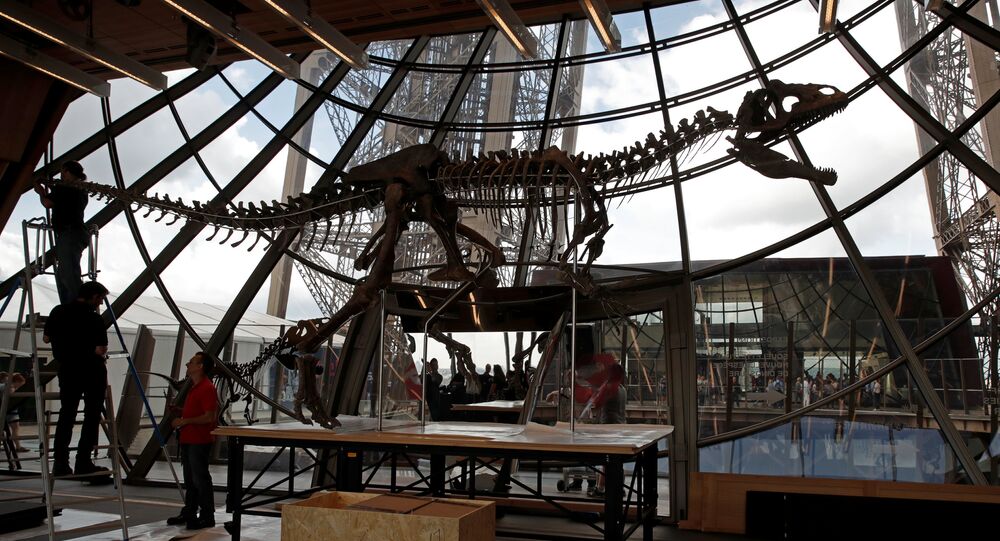 A 30-foot-long, 9-foot-tall skeleton of an unidentified dinosaur sold for more than $2.3 million at an auction held on the first floor of the Eiffel Tower in Paris Monday.

Sold by French auction house Aguttes, the skeleton, roughly 70 percent complete, was previously suspected of being a dinosaur from the allosaurus group until further study suggested it could be a new species altogether.

"Scientists first thought it was an allosaurus, but after an in-depth examination, the skeleton presented major anatomical differences from known allosaurus — notably more teeth and distinctive bones," paleontologist Eric Mickler told ABC News. "Looking at [the teeth], we can tell this carnivorous dinosaur died at an old age."

Auctioneer Claude Aguttes told Reuters that the buyer was French and that they plan to have it put on public display.

"This is amazing," Aguttes said. "Everyone will be able to see it, it will soon be lent to a museum, it will be studied by scientists, everything is perfect."

© AP Photo / Francois Mori
A Jurassic age (161-145 million years) dinosaur skeleton of an Allosaurus Jimmadseni, found in Wyoming, U.S. is displayed at Drouot auction house, in Paris, Wednesday April 11, 2018. The Allosaurus with a Diplodocus will be auctioned as part of a collection entitled 'Nature et Merveilles'.

Neither the names of the buyer nor the seller have been disclosed. The seller was previously identified only as a British businessman.

As Sputnik previously reported, the dinosaur was discovered in the Morrison Formation in Wyoming in 2013.