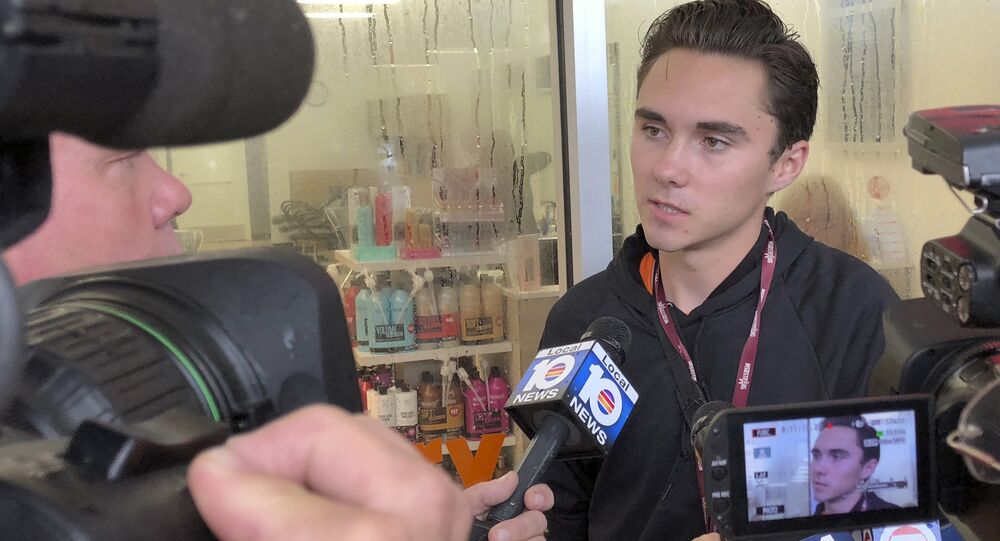 On Tuesday, a SWAT team entered the Florida home of David Hogg, a Marjory Stoneman Douglas High School shooting survivor and activist, after receiving a hoax emergency call claiming that there was a hostage situation inside the house.

The Broward Sheriff's Office in Florida received a call from an anonymous source on Tuesday saying that someone broken into Hogg's home with an AR-15 rifle and was holding Hogg and his family at gunpoint.

© Sputnik / Alexey Agarishev
Is March For Our Lives the Solution to America's Sickening Gun Violence?

Multiple law enforcement personnel and police helicopters were dispatched to the scene. According to NBC Miami, a police SWAT team surrounded Hogg's home before entering it.

There's just one problem: no one was at home at the time, certainly no gunman holding the family against their will. Hogg is currently in Washington, DC, with his mother to accept the Robert F Kennedy Human Rights award for his political advocacy initiatives regarding gun legislation.

When emergency responders realized the home was empty and no one was in danger, they determined that the phone call was a prank. Investigators are still working to determine who was behind the call. Prank calls to law enforcement agencies have recently come into the spotlight in the US. The practice is referred to as "swatting" and can be intended as simply an annoying prank — or to have more devastating effects. Last year, Andrew Finch was killed in his Wichita, Kansas, home by law enforcement after police received a hoax call from Tyler Barriss claiming that his mother and sister were being held hostage by Finch.

"Today, we're walking — we're going for a walk — and we saw some helicopters here, so we're like, 'Oh my God. What's going on?'" Hogg's neighbor Marcia Marques told Local 10 News. "We are still trying to overcome everything because everything is very difficult, but that episode made us feel more attentive."

"Two police cars, two motorcycles. We should be doing better," Courtney Keisen, a fellow Stoneman Douglas student who lives in the neighborhood, said. "Something like this shouldn't happen a lot."

Ever since the shooting at the Parkland, Florida, school on February 14 that killed 17 people, Hogg has been advocating for gun safety.

On May 25, Hogg and other teenagers organized a "die-in" protest inside a Publix supermarket in Coral Springs, Florida. The students also drew chalk outlines of bodies in the parking lot of the grocery store to illustrate the number of people killed by gun violence.

In an interview with WPLG Tuesday, Hogg said that the swatting incident was an attempt to distract from the activist work that he and other survivors have been doing to pass gun reform measures in the US.

"I think it's really a distraction from what we're trying to fix here, which is the massive gun violence epidemic in this country," Hogg said.

"[They're] trying to distract people from the March for Our Lives Road to Change, which we announced yesterday," Hogg told WPLG Tuesday. "[It's] a push to get the highest numbers of youth voters ever in American history turn out to vote come this November."

Hogg and several other Parkland students are planning on beginning a bus tour of the US on June 15 as a continuation of March for Our Lives, a student-led rally in support of stricter gun control that look place on March 24 in Washington, DC, and other cities across the US. During the bus tour, Hogg and other activists plan to hold voter registration drives and other initiatives to unseat congressional candidates who support the National Rifle Association.