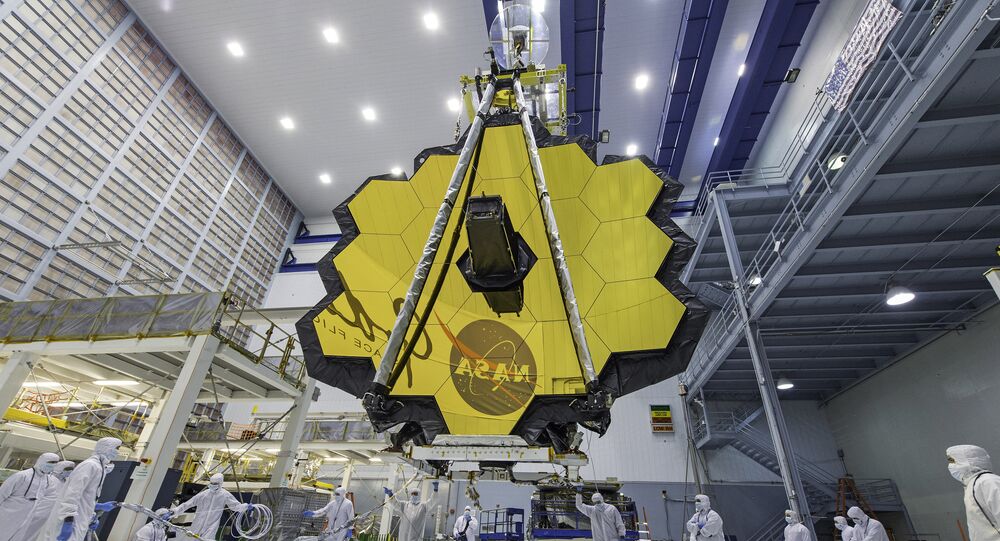 The recent testing of the telescope and its spacecraft took place at the Northrop Grumman facility in Southern California.

During the recent testing of the multi-billion dollar space telescope, a spacecraft meant to carry and provide support functions to the telescope lost screws and washers.

The five-layer sunshield of the spacecraft is nearly as big as a tennis court and is made from a heat-resistant material called Kapton.

Its function is to keep the telescope protected from the sun and to shield it from both its own and external light and heat.

“Right now we believe that all of this hardware we’re talking screws and washers here come from the sunshield cover. We’re looking at what this really means and what is the recovery plan,” Greg Robinson, the JWST program director at NASA Headquarters, said, according to publication Space News.

© NASA . NASA Goddard (screenshot)
To Infinity & Beyond - Eventually: NASA Delays Long-Awaited Space Telescope
He added that, “It’s not terrible news, but it’s not good news, either.”

This latest incident comes as an independent review board is analyzing the mission and its launch readiness. It was chartered by NASA in late March after it announced a one year delay in JWST’s launch.

The telescope is considered the world’s most powerful telescope. It includes 100 sunshield membranes and a near infrared camera. It is 21 feet in diameter and it will be used to find exoplanets.

During earlier testing the JWST revealed a number of technical glitches. The telescope was set to launch in spring 2019, but due to tears in the sunshield of the spacecraft, leaks in propulsion thruster valves and other technical glitches, NASA pushed back the launch timeline by almost a year to May 2020.

According to Robinson, the latest glitch is unlikely to cause another delay in the launch date.

“I still believe we’ll go in 2020, in roughly the same timeframe that we talked about, unless this problem takes longer than we expect,” he added.

The JWST will be a scientific successor to the Hubble Space Telescope. The telescope is named after James E. Webb, a US government official who was the administrator of NASA from 1961 to 1968 and played a vital role in the Apollo program.

'After Venus We Can’t Exclude Possibility of Other Planets Hosting Life' - Prof.