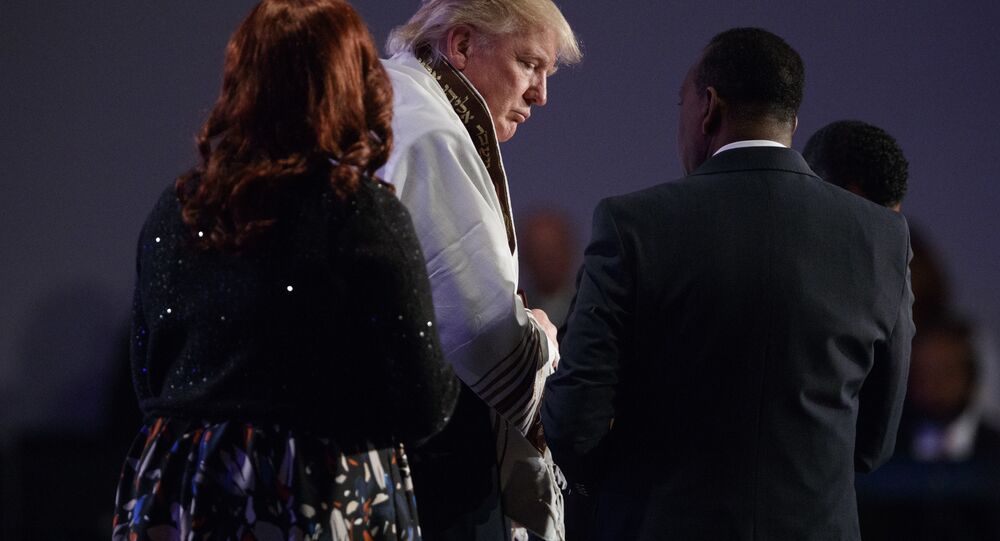 © AFP 2021 / ATTA KENARE
US Attempts to Dissuade Iran's Partners From Cooperation Violate JCPOA - Tehran
It's no secret that coastal American media despises current US President Donald Trump. What is less understood is how that loathing only appears to fan the flame of the US leader's tenacious popularity. The answer lies, in part, with Christian broadcasters, whose quiet ascendance over the past few decades — following a spectacular fall from grace in the 1980s — has bolstered the black and white Republican narrative, even at the cost of electing a strikingly polarizing president.

Christian television, once the province of flashy preachers, washed-up country singers and self-appointed faith healers, has long been avoided by Capitol Hill lawmakers when seeking election votes. Toward the end of the 20th century, American broadcast networks devoted to so-called Christian values tended toward absurdities including endless demands for money and protestations bordering on the magical, to say nothing of the steady diet of tabloid-level scandal, including embezzlement and sexual abuse.

Since the unlikely ascension of Trump to the White House, however, the reach of policy-influencing broadcasting networks that rely on interpretations of the Christian bible to underscore their editorial approach to news has transformed American media airwaves.

Once shoved into a corner niche, Christian-themed networks have now taken top spots in reaching regular listeners in the US, bumping up against the big three networks (ABC, CBS and NBC) and Fox News, and providing additional weight to the often conflicting and changeable policies emanating from the Trump White House.

Christian networks, including the Trinity Broadcasting Network (TBN) — the world's largest religious broadcaster — and Pat Robertson's Christian Broadcasting Network (CBN), recognizing which way the wind is blowing in Washington, have almost overnight repositioned themselves with an influx of pointedly political programming, almost 100 percent of which is indiscriminately pro-Trump.

Since early in Trump's election campaign, CBN has provided consistently sympathetic coverage and, as payback, has now been given consistent access to the president. Trump has given 11 personal interviews on CBN, and, in 2017, he showed up for CBN interviews more than CNN, ABC or CBS, according to an exhaustive Politico report.

Trump's cabinet appointees, staff members and various loyalists appear regularly on the CBN religious network as well. It's a marriage of convenience that both sides recognize as sustainable, at least for the time being.

The religious networks can point to their almost unprecedented access to the world leader and his staff as a means of inflating the legitimacy of their message — one that often includes bigotry, hatred and fear.

Trump, although no one would call him pious, has been able to strike a pleasing chord with an American religious viewership comfortable with the simple ‘us and them' narrative espoused by the former reality TV producer — a narrative that calmer heads in the US and the world consider to be the dumbed-down complaints of a monied child of privilege who is used to getting his way.

Although CBN has long belonged to the White House press corps and even garnered a seat in the White House briefing room, its recent sharp rise in status during Trump's presidency has not gone unnoticed.

Trump's first press secretary, Sean Spicer, offered CBN reporters the opportunity to lob softball questions to the president three times in just the first two weeks of his term, and, while speaking with Israeli Prime Minister Benjamin Netanyahu at a joint news conference, Trump picked a CBN reporter to ask the first question.

"The Trump administration has given CBN News the opportunity to be recognized in places a Christian news organization normally wouldn't," stated CBN vice president Rob Allman in an email to Politico.

For Americans who regularly watch religious broadcasting, particularly for the white evangelicals who voted overwhelmingly for Trump and continue to poll approvingly on his performance, the message is one of success.

CBN and TBN regularly burnish Trump's image while brushing away his more egregious behaviors including allegations of sex scandal, shady real estate deals and a creeping nepotism, while the president continues to rely on the polls to justify his simple and increasingly nationalistic message.

"Evangelicals, going back to the time of the Scopes trial, have always been sensitive to being seen as pariahs," stated Mark Ward, editor of The Electronic Church in the Digital Age.

Incorrect to Associate Terrorism With Any Religion