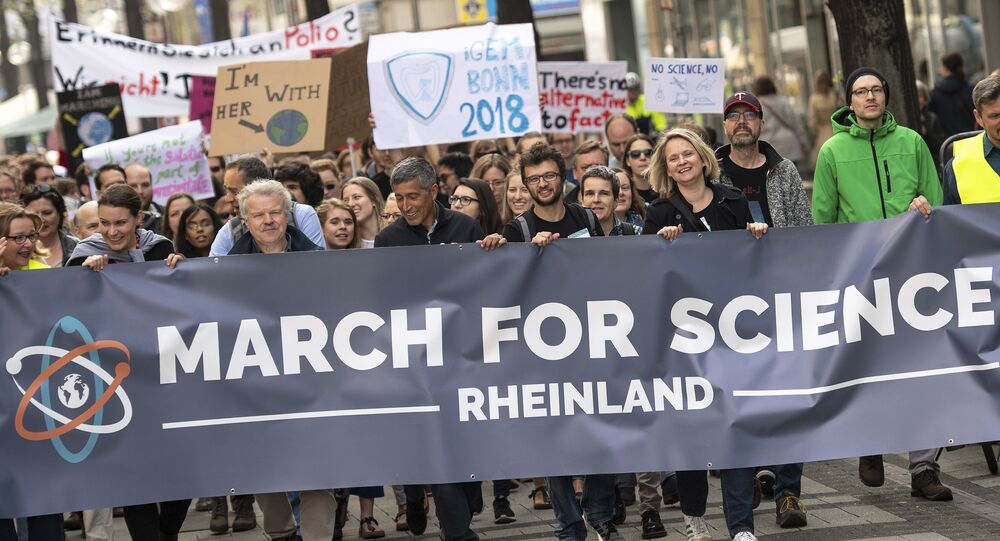 The second annual March for Science will take place in 200-plus locations around the world on Sunday, in support of using fact-based evidence to support public policy.

© Flickr / Bruce Tuten
Watchdog to Sue Trump Administration Over 'Injection' of Politics Into Science
Responding to widespread fear that the ascendancy of US President Donald Trump would lead to a sharp drop in evidence-based thought, the March for Science originally sought to get lawmakers to use facts and scientific data when making decisions. This year's march will be bigger, say organizers, and while retaining the original mission, will also focus on taking action.

"Given that last year it was the early months of the Trump administration, there was more anxiety there," stated New York City march organizer David Kanter, cited by New Scientist.

"But the ultimate goals of building a community of science advocates and influencing policy with science are still the driving forces," Kanter added.

Following the unlikely vote result of the 2016 US presidential election and the explicit threat Trump poses for the use of evidenced-based thought in his decision-making process, tens of thousands rallied in hundreds of locations around the world last year, including New York City, London, Los Angeles and Washington DC.

The first March for Science opened a debate regarding how researchers and scientists should become more political as a means of simply keeping the conversation on a realistic footing.

According to Aaron Huertas, a science communicator and former national communications lead for the march organizers, the group is "publishing board minutes, doing some financial disclosure and have adopted inclusion and equity, whistleblower, conflict of interest, and executive compensation policies," according to Gizmodo.

"Scientists have always been politically active, even when they don't recognize it as such," Huertas said, adding that, "science has a grassroots movement that most of us recognize now."

The science interpreter asserts that he seeks to have researchers share results more fairly, prevent institutions from suppressing important information, as well as preventing the censorship of science.

The March for Science wants those interested in evidence-based thought to become more engaged in the political process too, particularly as voters.

A recent study noted that science majors at many universities were less likely to vote, according to The Conversation, which mentioned also that additional studies had confirmed a low interest in politics by scientists.

"One of the most pressing issues in 2018 is making sure scientists actually turn out to vote-not only for evidence-based policies but [for] lawmakers who factor equity and justice into their decision making," stated biologist Maryam Zaringhalam, cited by Gizmodo.

"We're committed to efforts to get out the vote that center science and social justice."

Political groups like 314 Action are seeking to get scientists elected to public office as well.

"We are thrilled that more than 7,000 scientists have reached out to us over the last year and a half for candidate training and support, and hundreds of them are running in districts across the country this year," said Ted Bordelon, a spokesman for group, cited by Gizmodo.