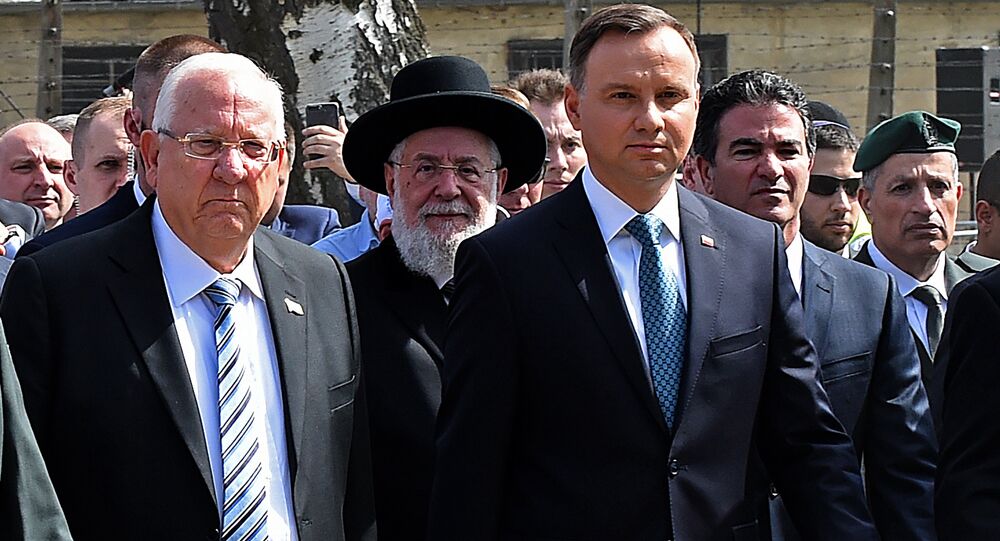 Thousands of people marched all the way from Auschwitz to Birkenau in Poland on April 12, thus paying tribute to millions on Holocaust Victims' Remembrance Day.

One cannot ignore Polish collaboration with the Nazis during the Holocaust, Israeli President Reuven Rivlin told his Polish counterpart, Andzrej Duda, in a meeting on Thursday, right before the annual March of the Living at the former death and concentration camp of Auschwitz.

A few weeks earlier the Polish authorities passed a controversial law, which stipulates that allegations of Polish complicity in the Shoah, as the Holocaust is referred to, are ungrounded and illegal. The bill is still to be approved by Poland’s Constitutional Court.

© AFP 2020 / JANEK SKARZYNSKI
Participants open the March of the Living, a yearly Holocaust remembrance march between the former death camps of Auschwitz and Birkenau in Oswiecim

"Not for nothing we describe the death camps as the camps of Nazis and their helpers," Rivlin said. "There is no doubt that many Poles fought against the Nazi regime, but we cannot deny the fact that Poland and Poles lent a hand to the annihilation" of Jews during the Holocaust, Rivlin said.

He went on to acknowledge that there needs to be a full-fledged study of the events and trends during the Holocaust.

"Statesmen must shape the future, and the historians have the duty to describe the past. One must not stray into the other’s field," he said.

In response, Duda admitted to an air of controversy around the new law, but he reiterated that the Polish government is not aiming to prevent survivors from giving their testimony.

© AP Photo / Czarek Sokolowski
People take part in the annual "March of the Living" to commemorate the Holocaust, a yearly Holocaust remembrance march between the former death camps of Auschwitz and Birkenau, in Oswiecim, Poland

The Auschwitz-Birkenau complex, which lies in southern Poland, was the biggest death camp set up by Nazi Germans during World War II to eliminate European Jews. Thousands of people gathered at the location today, on April 12, to take part in a solemn march in memory of the 6 million Jews killed by German Nazis during World War II.

The March of the Living, this year led by the presidents of Poland and Israel, is an annual educational event marking Yom HaShoah, Israel's Holocaust Remembrance Day. The countries’ leaders lit candles, bowed their heads and pressed their hands on the Death Wall before taking their place in the march, which united young Israelis and other Jews wishing to learn about their nation’s tragedy.

The solemn march began near Auschwitz’ main gate and the city’s watchtowers and covered 2 miles to Birkenau, where Jews from all over Europe were brought to be murdered in gas chambers. According to official data, 1 million Jews were killed in Auschwitz between 1940 and 1945, including 232,000 children.

According to the most restrictive data on the Holocaust, provided by Adolf Eichmann, one of the Holocaust's architects, the overall death toll stands at 6 million Jews. Meanwhile, a research project started in 2000 by investigators with the United States Holocaust Memorial Museum, found in 2013 that from 15 to 20 million people had died or been imprisoned at a range of Holocaust-related sites.

Ultra-Orthodox Jews Not Enough to Help Netanyahu Be Reelected - Analyst