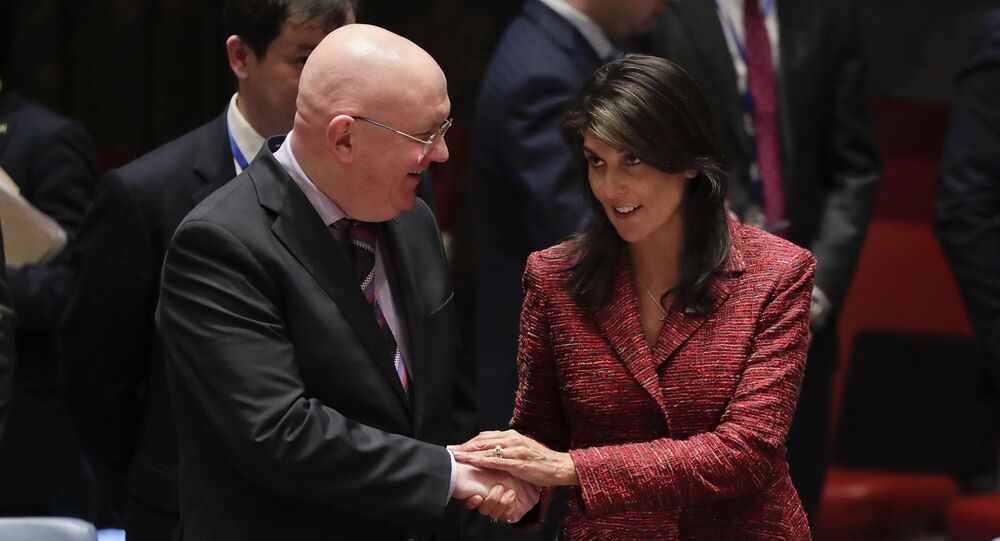 XOXO: Russia’s UN Envoy Reveals How He Kisses His US Counterpart

While the relations between Moscow and Washington remain strained amid tensions in the Middle East and in Europe, it appears that interactions between Russian and US diplomats at the United Nations follow a different dynamic.

Vasily Nebenzya, Russia’s Permanent Representative to the UN, said that the relations between the Russian and American diplomats remain cordial despite the current geopolitical tensions in the world.

"Here I mostly socialize with my colleagues. And when it comes to the American ones, believe it or not, we have normal relations with Nikki Haley and her mission," the diplomat said.

Also, when asked how he and Haley greet each other, Nebenzya promptly replied that they "kiss," adding that he hopes that the relations between Russia and the US will eventually become as good as those between him and his American counterpart.

Earlier US President Donald Trump tweeted that his country’s relations with Russia are even worse than they’d been during the Cold War.

​In another tweet that he posted minutes earlier, Trump also blasted Russia for being allies with “a Gas Killing Animal who kills his people” – an apparent reference to Syrian President Bashar Assad – and threatened a missile strike in retaliation for an alleged chemical attack in the Syrian city of Douma that Washington claims was carried out by Damascus.

© REUTERS / Joshua Roberts
Unstoppable Trump, Immovable Zakharova: Social Media War of Words As It Happened
​These remarks were preceded by a fresh round of sanctions imposed by the US against 38 Russian businessmen, state officials and companies on its sanctions list under the pretext of Moscow's alleged "malign activity around the globe."

Last month the United States also expelled 60 Russian diplomats in response to an alleged poisoning of a former Russian spy and his daughter in the UK city of Salisbury.