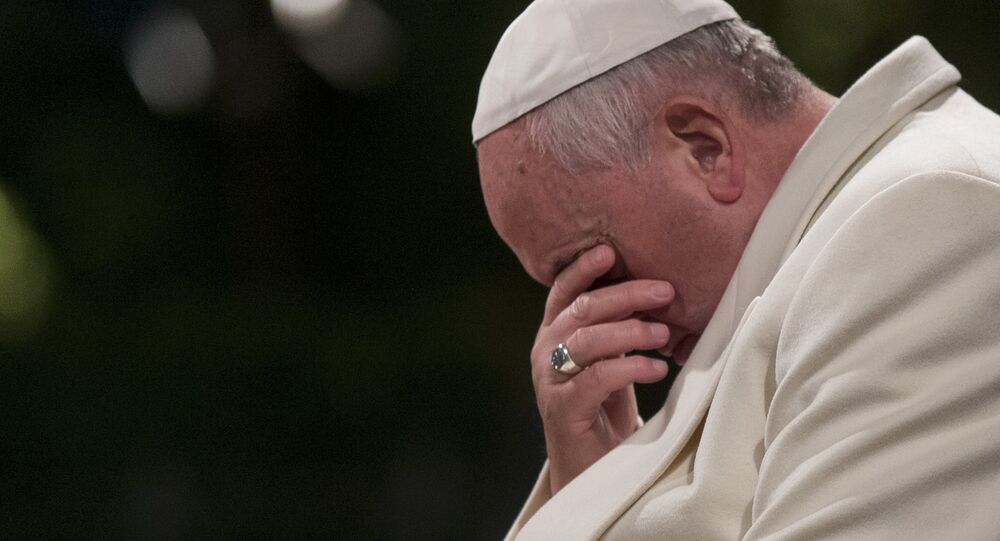 In a marathon question-answer conversation with several hundred young people in Rome on Monday, the Catholic Church's Pope Francis attacked prostitution, praying for the forgiveness of all Catholic men who engage in purchasing sex from prostitutes.

Speaking to the Pope, a 32-year-old Nigerian woman and former sex trafficking victim said she was troubled by the fact that the majority of men paying for prostitutes in the streets of Rome seem to be Catholics. Francis responded by saying that it was indeed likely that nine in ten clients of prostitutes are baptized Catholics.

"I think of the disgust these girls must feel when men make them do these things," the Pope said, adding that he "would like to take advantage of this moment to ask your forgiveness, from society and from all the Catholics who carry out this criminal act."

© REUTERS / Stefano Rellandini
Analysts Explain How China-Vatican Thaw is a Win-Win for Both
"This is not making love, this is torturing a woman. Let's not confuse terms," Francis stressed.

According to the Pope, the sexual exploitation of women stems from a "sick mentality," and is a problem that must be fought against. "It is a sickness of humanity, a sickness of looking at society in a certain way, a crime against humanity," he said, adding that feminism has not been able to deal with the problem.

With human trafficking and sex slavery two major issues of his papal agenda, the pope urged young people to join him in the "battle" against forced prostitution, "for the dignity of women."

© AP Photo / Andrew Medichini
Blame the Snake: Pope Credits Talks in the Garden of Eden as First ‘Fake News’
The Pope's four hour long conversation with young people was part of an effort by Church leaders to learn about youth attitudes toward the Catholic Church ahead of a big synod of bishops meeting on youth issues scheduled for later in the year. He urged young people to "take risks" and speak with courage and without shame, prompting a conversation that included topics such as prostitution, gang violence, racism and poverty, as well as same-sex marriage, sexuality, and the role of women in the Church.

The Pope's new book, God is Young, will be released in Italy on Tuesday and is expected to be translated and published into English in time for the synod. The 160-page book is based on Francis' interviews with Italian journalist Thomas Leoncini, and tackles issues including the marginalization of young people and insecure working environments.