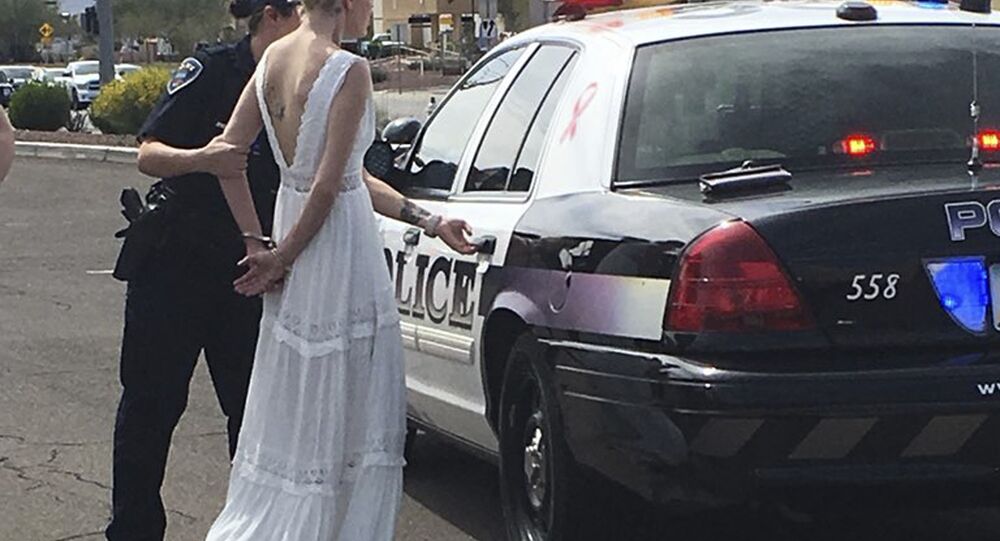 Marriage can be an intimidating event, but liquid courage might not be the best way to get through it, as one Arizona bride discovered Monday morning when she was arrested on suspicion of driving under the influence after crashing her car - in all her wedding day regalia.

According to Marana Police Department officials, 32-year-old Amber Young was involved in a three-car collision that resulted in one person being admitted to the hospital with minor injuries at about 10:30 a.m Monday.

The Arizona Daily Star and multiple local media sources reported that Sergeant Chriswell Scott of the Marana Police Department tweeted a picture of Young's arrest, while she was wearing her wedding dress with her hands cuffed behind her back. However, the tweets reported are no longer available on Scott's official account or the Marana Police Department's Twitter account.

"Don't drive impaired, till death do we part doesn't need any help," Scott reportedly tweeted in the now-deleted post.

"This could've turned out way worse than it did," Scott wrote in the deleted tweet, the Arizona Daily Star reported. "It's supposed to be the happiest day of her life and this just goes out as a reminder as to why you should never drive while impaired."

Screenshot/Post and Courier
‘I'm Gonna Change the Law on This': US State Senator Whines Throughout DUI Arrest (VIDEOS)

Young was released from custody after "submitting to a blood draw," Scott reported. The 32-year-old did not take a breathalyzer test but she did sign a criminal citation for a DUI before she was released to her fiance. It is unclear whether Young made it to her wedding. Young's blood alcohol level was not revealed.

Big Fat UK Royal Wedding: The Obamas Over the Trumps? What Will Melania Wear?