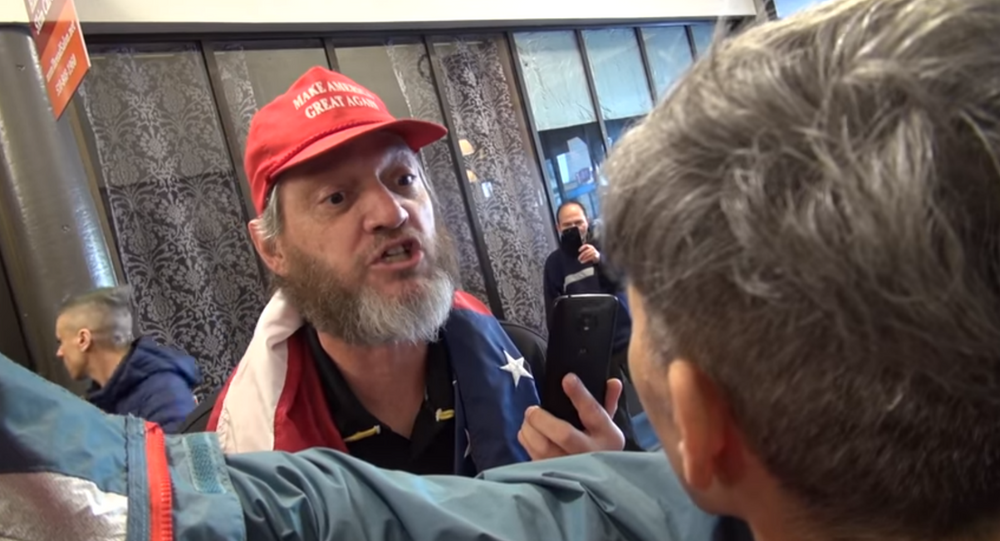 Two Trump supporters were filmed Saturday confronting the manager of Berkeley's Revolution Books and stating that they would be burning down the establishment.

Posted to the store's YouTube page, the video begins with a woman asking Reiko Redmonde, the manager, if she believes her interlocutor to be racist because she supports US President Donald Trump.

The second Trumper, a man wearing a Make America Great Again hat and the American flag as a shawl, jumps into the confrontation with his own barrage of insults.

​"F**king commie scum… you're commie scum," the man tells Redmonde. "We're going to burn down your bookstore, you know that, right?"

After the video transitions to a different viewpoint, the man remarks, "Trump is going to get rid of all you pieces of sh*t."

This did not give POTUS' two fans warm feelings. Their verbal assault, however, ended before police arrived on the scene.

Speaking with KRON4, Redmonde promised the incident would not intimidate employees.

Though this was the first time that the bookstore was threatened with violence, it was the tenth time that employees found themselves trying to get a handle on far-right activists berating customers and employees.

"These people are targeting immigrants. They're targeting Muslims. They're targeting anyone that disagrees with Trump," Rafael Kadaris, an employee at the store, told KRON4. "These pro-Trump fascist thugs have repeatedly targeted Revolution Books over the last series of months and they're targeting this store because we are the political and intellectual center for an actual revolution."

"These people are supporters of a white supremacist president and we stand for everything they're against," Kadaris added.

Once the incident was over and local police left the area, store employees launched a community event to reflect on what had happened. No arrests have been made.