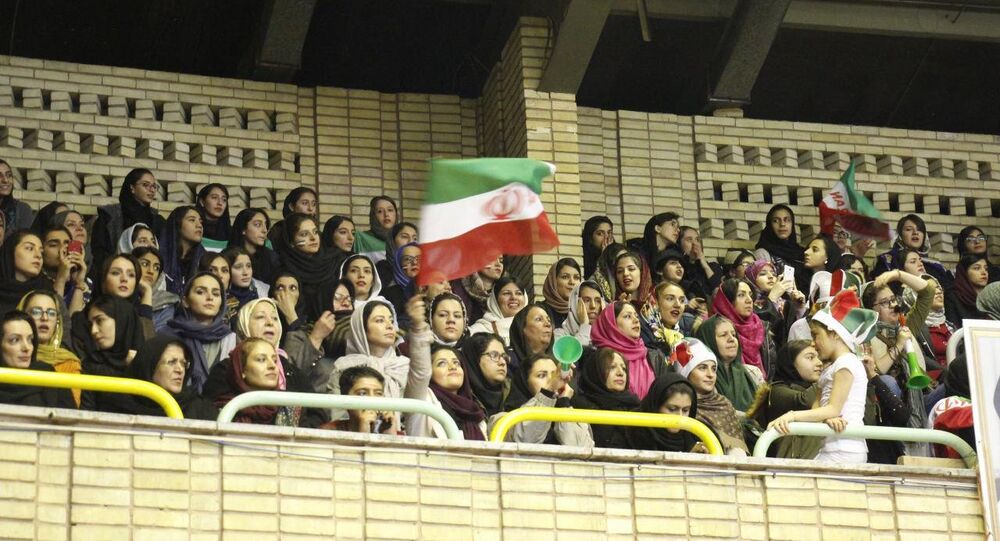 In a historic breakthrough for the country, Iranian women have been allowed to attend a basketball match watching male players play the game. Sputnik Iran spoke to director of the Public Relations Department of the Iranian Basketball Federation, Zahra Sadat Hosseini, about this monumental event.

The National Basketball Federation of the Islamic Republic of Iran has permitted Iranian women to take to the stands and watch a game between the national teams of Iran and Iraq, which was held in the Azadi sports complex in the framework of the 2019 FIBA Basketball World Cup.

For a long time, women in Iran were strictly forbidden to attend sporting events. They could attend exclusively women's sports games in basketball, football or volleyball. Also Iranian sports lovers could not watch the broadcast of international matches in theaters or cafes.

© Sputnik
Dozens of Iranian Women Arrested for Taking Off Headscarves in Public
Local cinemas had to abandon the idea of broadcasting the World Cup, because the authorities said that the matches cannot be shown in the halls with a "mixed" audience. Later, football broadcasts in restaurants and cafes were completely banned.

But not all Iranian politicians approved such a tough stance  banning the presence of women in stadiums during sporting events in Iran. Among them, the former Iranian President Mahmud Ahmadinejad who in 2006, sent an appeal to the Organization of Physical Education of Iran with a request to allow women to enter  stadiums.

Finally, after many years of prohibition  Iranian women received an opportunity to attend a match on February 25. The National Basketball Federation of the Islamic Republic of Iran allowed the Iranians to take the stands and watch a game between the national teams of Iran and Iraq.

Sputnik spoke with the director of Public Relations Department of the Iranian Basketball Federation, Zahra Sadat Hosseini, who explained how this happened.

"The great role in resolving the issue of the presence of women at sports matches was played by the efforts of the new president of the IRI Basketball Federation, Dr. Ramin Tabatabaei, and the Minister of Sport and Youth Policy Masoud Soltanifar,” Hosseini said.

She went on to say that this is a big step forward, which was welcomed not only by the fans but also by the players in the national teams.

“All sports, political and economic media of our country provided active information support. The match was attended even by female deputies to the Iranian parliament. Moreover, an important meeting took place recently at the Ministry of Sport and Youth Policy with the participation of women deputies, members of the Board of Directors of the special parliamentary commission on culture Fatemeh Zolghadr and Tayebeh Siavoshi Shah-Enayati,” she said.

“Thus, Ms. Ebtekar personally received the approval-fatwa from one of the highest mujtahids of the Islamic Republic of Iran, Makarem Shirazi, who welcomed the fact that the Iranians were given such freedoms, as unhindered participation in sports matches with their families in the stands of the fans,” Hosseini said.

She added that this event received a wave of positive feedback and gave an incentive to other sports to get support from fans.

“In particular, the Football Federation of our country hopes that football lovers will also come to support the players of their beloved team at  upcoming matches,” she said.

Football, Finally: Saudi Women to Be Allowed Into Stadiums for First Time Friday