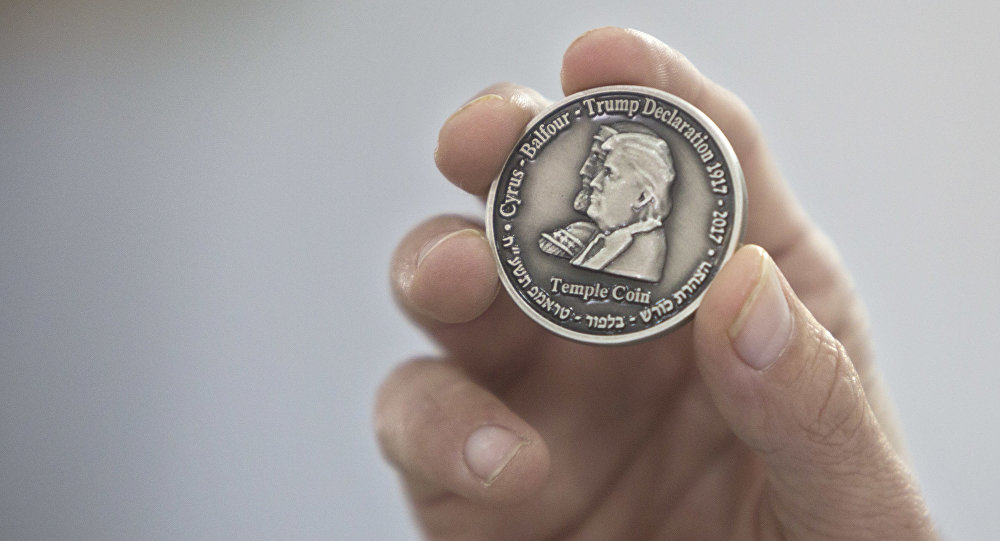 On Wednesday, Israeli organization Mikdash Educational Center announced that it minted a coin with US President Donald Trump's face as a way to honor his decision to recognize Jerusalem as Israel's capital.

According to the center, the "Temple Coin" will feature Trump alongside King Cyrus, who allowed Jews to return to Jerusalem from their exile in Babylon 2,500 years ago. The coin will also include the name of Arthur Balfour, who is known for the 1917 declaration that announced the British government's support of a "national home for the Jewish people."

Rabbi Mordechai Persoff told AP that Trump, mirroring the efforts of Cyrus, had made a "big declaration that Jerusalem is the capital of the holy people."

"The specially minted coin serves as a commemoration and symbolizes the thanks due to the Almighty for the beneficence bestowed upon the Jewish people — and, indeed, the whole of mankind," a statement on the Mikdash Educational Center reads. "The beautifully designed engraving announces the ‘Trump-Balfour-Cyrus declaration' to express we are part of a historical and divine process towards the recognition of all mankind of the historical role of Jerusalem."

Interested buyers can purchase their very own Temple Coin for the price of $50. However, they cannot be used as currency.

According to the center, donations "will help spread the light of Jerusalem and the spirit of the Holy Temple throughout the world."

Officials have only minted a total of 1,000 coins.