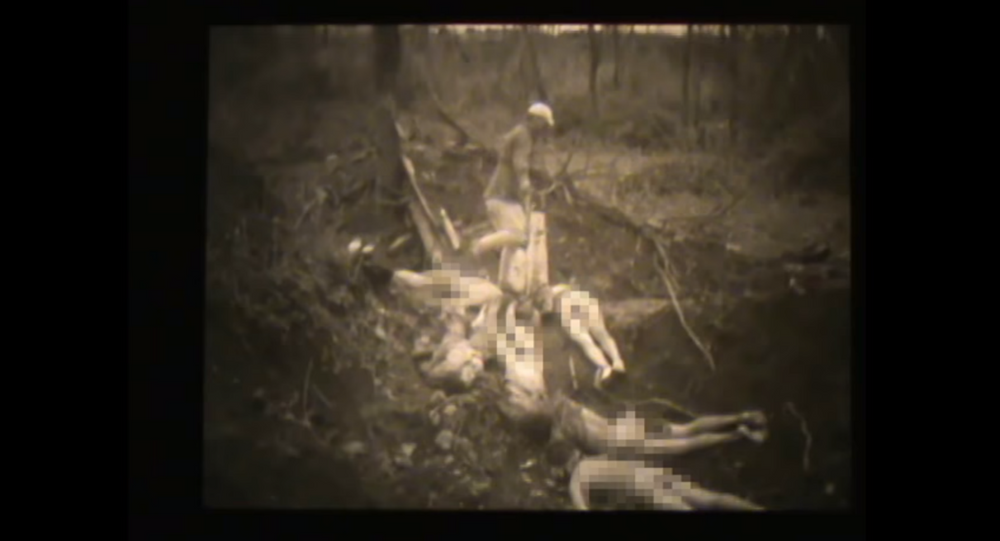 On Tuesday, the Seoul Metropolitan Government and the Seoul National University Human Rights Center released footage of the 1944 massacre of Korean sex slaves by Japan in China during World War II.

The footage, which was discovered in the US National Archives and Records Administration by researchers, shows a Chinese soldier examining the dead inside a pit in one scene. A second recording shows the same soldier removing a sock from one of the bodies in the pit. In a third clip, smoke is seen coming from a different pit of bodies.

​During the unveiling of the footage, the joint team of researchers indicated that the recordings were taped September 15, 1944, by an Allied Command soldier identified only as Baldwin. The footage was filmed in Tengchong, a city located in China's Yunnan province.

Though the Japanese government has denied any responsibility for the Korean women who were forced into sex work to accommodate the Imperial Army, researchers stated that the footage proves that the government played a role in the matter.

"At a time when the Japanese government denies the existence of sex slaves and their massacre, today's revelation offers a meaningful glimpse into what really happened to the sex slaves," Kang Sung-hyun, one of the researchers involved in the investigation, said during the conference.

The team also revealed an Allied Command document that detailed the killing of Korean sex slaves by Japanese forces. The report stated, "Night of the 13th [Sept. 13, 1944], the [Japanese] shot 30 Korean girls in the city."

While an exact number is unknown, officials estimated that roughly 200,000 women, mostly Korean, were forced to work in brothels across the Japanese Empire, including in occupied China, for Japanese troops as comfort women. However, according to the Japanese government, the women took up sex work voluntarily in order to make money off soldiers and were never forced into the trade by government officials.

"We know all too well we shouldn't repeat this tragic history and one part of remembering it is documenting it," Park Won-soon, mayor of Seoul, said. "The city will continue to support the project that will help people remember history."

The footage is the latest find by the team of researchers after footage they released in July 2017 that showed Korean sex slaves stationed at a Japanese military brothel in Songshan, China.

The research project, which began in 2016, was born out of the long-standing dispute between Seoul and Tokyo over Japan's wartime sexual slavery, Kang said.