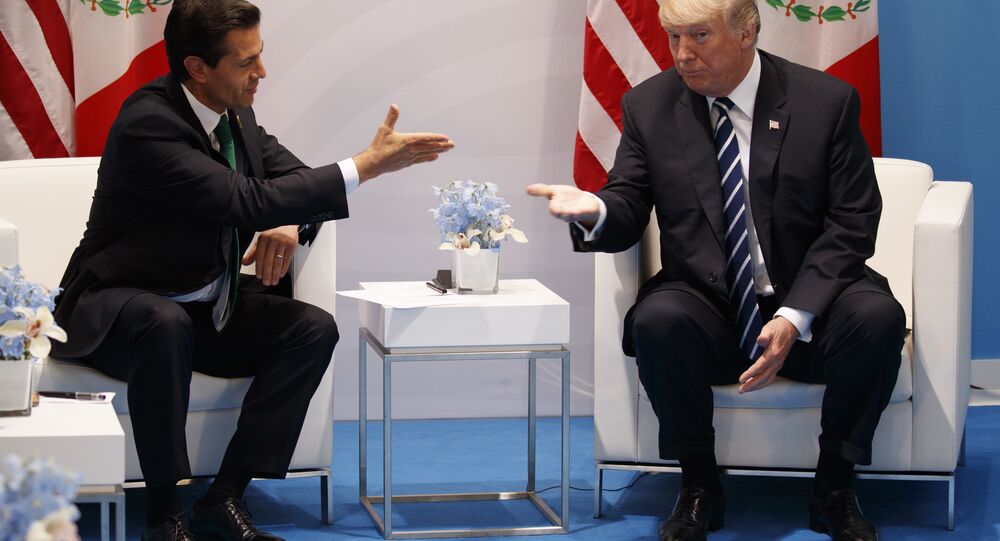 US President Donald Trump reportedly lost his temper during a phone conversation with Mexican President Enrique Peña Nieto after the latter insisted that Trump rescind his declaration that Mexico City would pay for Washington’s border wall between the two neighboring countries.

The Mexican president had been planning a trip to Washington in March, but, according to officials in Mexico and the US, the state visit was called off because Trump refused to agree to publicly recognize Mexico's policy of not paying for the construction of a border wall between the two longterm allies, cited by the Washington Post.

An avowed promise during Trump's successful presidential campaign, the construction of a 2000-mile wall between Mexico and the US — as a means of limiting illegal migration — is widely reviled by politicians, pundits and people on both sides of the border.

During an almost-hour-long phone conversation on Tuesday, Peña Nieto and Trump spent a significant portion on the wall, and Trump's adherence to his unpopular promise brought the talks to a hasty close when the US president quickly ended the call, according to officials who spoke on the condition of anonymity due to the sensitive nature of the subject matter.

Peña Nieto, facing an upcoming July election, has consistently held to his position that Mexico will never pay for the Trump-sponsored wall, while the US president has made the increasingly unlikely multi-billion dollar infrastructure project a cornerstone of his White House legacy.

"The problem is that President Trump has painted himself, President Peña Nieto and the bilateral relationship into a corner," asserted former Mexican ambassador to the United States Arturo Sarukhan.

"Even from the get-go, the idea of Mexico paying for the wall was never going to fly," Sarukhan pointed out.

"[Trump's] relationship with Mexico isn't strategically driven. It's not even business; it's personal, driven by motivations and triggers, and that's a huge problem," he said, adding that, "It could end up with the US asking itself, ‘Who lost Mexico?'" cited by the Washington Post.

US officials remained optimistic, however, offering platitudes and political boilerplate following the contentious conversation and its rapid curtailment.

"We enjoy a great relationship with Mexico," Trump National Security Council spokesman Michael Anton vowed, continuing, "the two administrations have been working for a year to deepen our cooperation."